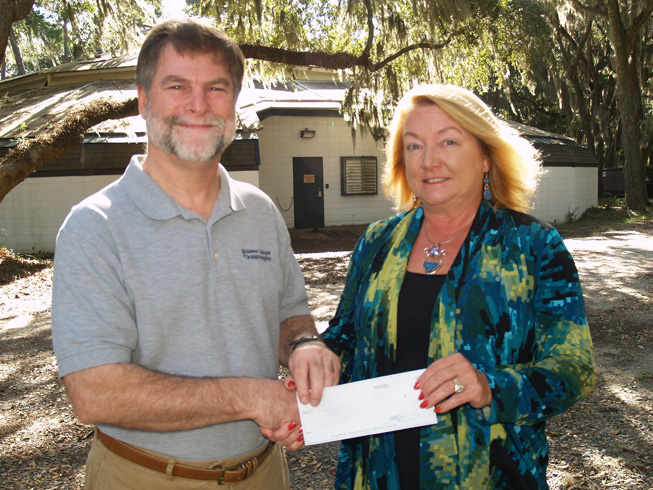 “We are pleased to support the UGA Skidaway Institute of Oceanography in its continuous effort to conduct research and protect our coastal environment,” said Michelle Vine. “Every day we enjoy the benefits of living on the coast, and as a community, we should never forget how important Skidaway Institute is to us.”

Vine’s father, Al Smith, was a World War II Marine Corps veteran, and, like his daughter, a UGA graduate.  He worked in industrial relations for General Motors in Doraville, Lockheed in Marietta and Union Camp Corp. in Atlanta and Savannah. For the last 12 years before his death in 1998, he owned Complete Security Systems.

The Albert Dewitt Smith Jr. Observational Laboratory will be located in the soon-to-be-created Center for Hydrology and Marine Processes. Earlier this year, the Georgia General Assembly approved a $3 million appropriation to renovate and repurpose a circa-1947 concrete cattle show barn for laboratory and meeting spaces and as a home for the center. Innovative for its time, the cattle barn was constructed by the Roebling family. The Roeblings established the Modena Plantation in the mid-1930s, and raised black angus cattle and Hampshire hogs before they donated their land to the state in 1967 to create Skidaway Institute.

“We are very grateful to the Vines for their generous gift,” said UGA Skidaway Institute Interim Director Clark Alexander. “This will help support our education and research activities, both here on the coast and around the world.”

“The UGA Skidaway Institute is a division of the University of Georgia, but it also relies heavily on local support,” Vine said. “Please join us by donating online at www.skio.uga.edu, and becoming a member of ASI, the Associates of Skidaway Institute.”