Skidaway Institute of Oceanography scientists Jens Nejstgaard and Stella Berger are part of a 21-member, international team of researchers whose paper was recently published in the Journal of Experimental Marine Biology and Ecology.

The object of the research was to observe the effects of different light levels on the behavior of microscopic marine organisms. The team focused their efforts at a group of organisms called mixotrophs. Those are single-cell plankton that exhibit the characteristics of both animals (heterotrophs) and plants (autotrophs). They feed on other organisms, but they also can grow through photosynthesis, just like algae and other plants.

“Most higher organisms are either plants or animals, and we have therefore traditionally sorted most organisms in to these two groups, or fields of science: botany or zoology,” said Nejstgaard. “However, as our understanding of the smallest sized life on earth, single celled organisms is rapidly growing it appears that a large part of the life on Earth may be mixotrophs. This opens new focus of seeing, and investigating our ecosystems.” 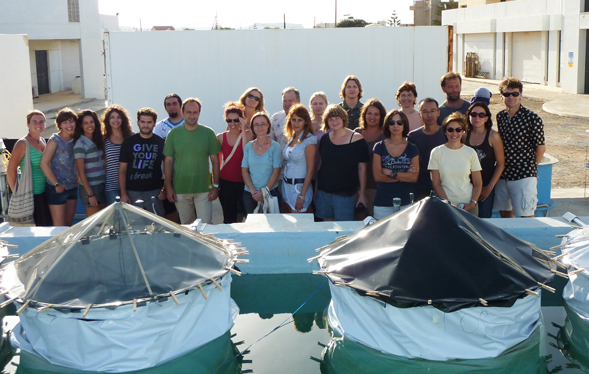 Nejstgaard, Berger and their colleagues, collected natural water containing plankton and other organisms from the Eastern Mediterranean Sea near Crete and transported it to a into specially-designed tanks on land, called mesocosms, at the Hellenic Centre for Marine Research.  In the 30-cubic-feet mesocosms they adjusted light levels to simulate differences in ocean depths down to approximately 150 feet.

The researchers found the mixotrophs do react to different levels of light. In general, the organisms tended towards plant behavior in brighter light and animal behavior at lower light levels. However, they also found that response is very complex, and the entire team of  scientists that worked on the mesocosms are presently analyzing a large amount of data to clarify many of the ecosystem interactions in this complex system.