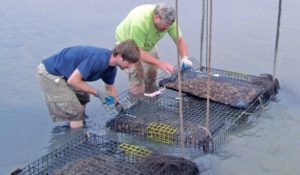 The Shellfish Research Lab conducts research on living shorelines and contributes new technology to support the development economically viable and environmentally friendly aquaculture industries. The Shellfish Research Lab is home to the state’s first oyster hatchery, which launched in fall 2015. At full capacity, the hatchery is expected to produce between 5 million and 7 million spat per year, with an annual estimated final market value between 1 million and 2 million. 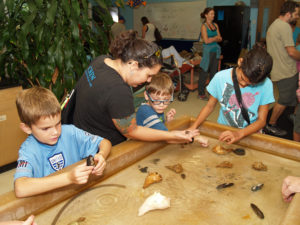 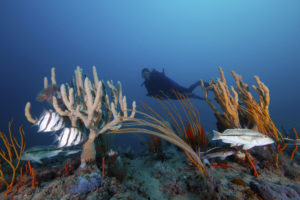 Designated by President Jimmy Carter in 1981, Grays’ Reef National Marine Sanctuary protects a vibrant hard-bottom area off the Georgia coast. The reef’s scattered rocky outcroppings and ledges provide homes for an abundance of marine life. Crabs, lobsters, soft corals, sponges, sea stars and other organisms form a dense carpet of living creatures, covering the nooks and crannies of Gray’s Reef and giving it the name “live bottom.” The reef attracts more than 200 species of fish, including black sea bass, snappers, groupers and mackerels. Loggerhead sea turtles, a threatened species, forage and rest year-round at Gray’s Reef, and the reef is within the critical habitat and only known winter calving ground of the highly endangered North Atlantic right whale. The 22-square-mile sanctuary, located 19 miles east of Sapelo Island, is the only protected natural reef and one of a few natural marine protected areas in the Atlantic Ocean between Cape Hatteras, North Carolina and Cape Canaveral, Florida.

The Office of National Marine Sanctuaries serves as the trustee for a network of underwater parks encompassing more than 600,000 square miles of marine and Great Lakes waters from Washington state to the Florida Keys, and from Lake Huron to American Samoa. The network includes a system of 13 national marine sanctuaries and Papahānaumokuākea and Rose Atoll marine national monuments.

UGA Skidaway Institute of Oceanography’s research vessel, the R/V Savannah, is a platform for scientific research and education along the East Coast and the Gulf of Mexico. The ship is a member of the University-National Oceanographic Laboratory System (UNOLS), the nation’s academic research fleet, and is the only such vessel between Miami and Delaware. The R/V Savannah is used by UGA scientists as well as national and international researchers, with operations primarily supported through federally funded research. Users pay a day rate that provides funds for operations and maintenance of the vessel. The R/V Savannah typically spends 150 days at sea each year on research and education missions.