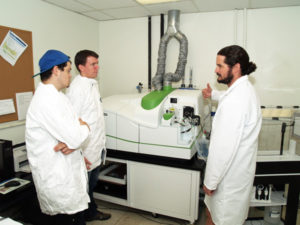 Chemical oceanographers seek to understand the nature of elements and compounds found in marine environments. The sources, sinks, and distributions of the ocean’s chemical constituents impact primary productivity and marine food webs, natural resources, and global climate. Researchers at Skidaway Institute are experts in the study of carbon, nutrients, trace elements, reactive oxygen species, and stable isotopes.  At Skidaway Institute, we investigate these chemical species and their respective cycles to further our understanding of how the ocean functions.  Members of the chemical oceanography group at Skidaway Institute include:

Some examples of Skidaway Institute research projects include:

UGA Skidaway Institute of Oceanography’s research vessel, the R/V Savannah, is a platform for scientific research and education along the East Coast and the Gulf of Mexico. The ship is a member of the University-National Oceanographic Laboratory System (UNOLS), the nation’s academic research fleet, and is the only such vessel between Miami and Delaware. The R/V Savannah is used by UGA scientists as well as national and international researchers, with operations primarily supported through federally funded research. Users pay a day rate that provides funds for operations and maintenance of the vessel. The R/V Savannah typically spends 150 days at sea each year on research and education missions.