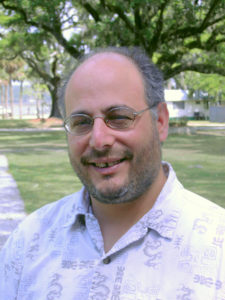 Thanks for coming out to the 2018 Annual Skidway Marine Science Day Open House and participating in the Discover The Microbes Around Youactivity.  We’re delighted that you decided to spend part of your day with us and hope that you had a fun and informative afternoon.

The pictures of all those plates you swabbed are now available here.  A total of 129 of you sampled a wide variety of microbial habitats including seawater and shrimp, dirt, trees, body parts, cell phones and other various surfaces.  With a few notable exceptions most of the surfaces had at least some bacterial growth on the plates.

In case you’ve never looked at these types of plates before I thought I’d give you a little information to help you understand what you are looking at.  The plates are composed of bacteria food basically similar to a chicken or beef broth and solidified with a Jello-like substance called “agar”.  We used two types of plates, both contained nutrients that bacteria like but one had a lot of salt and the other only a little.  If you sampled a salty environment, for example seawater, we gave you a salty plate, if you sampled a non-salty environment, for example your phone, we gave you low salt one. The plates were all sterilized before you used them so you can assume that any bacteria that grew on them came from what you sampled.

When you swabbed a surface with your sterile cotton swab any bacteria that got stuck on the cotton tip was then transferred to the surface of the agar plate when you spread it around on the plate.  Of course individual bacteria are so small that you can’t see them with your eye so when you spread them on the plate you couldn’t see anything except maybe the track the swab made on the agar.  In fact, bacteria are so small that a billion of them could fit on top of a nail head. However, although they are small they can grow very fast, doubling sometimes as fast as once every 10 min. Bacteria grow and then reproduce by a process called “binary fission”.  In binary fission, one cell spits into two identical cells.  As bacteria grow one becomes two, two becomes 4, four becomes 8 et cetera.  This is called “exponential growth.”  As you can imagine, pretty soon there can be billions of them.  We incubated the plates for 2 days allowing the bacteria to grow for up to 288 generations (if the doubling time was 10 min)!  In this time a single bacterium that landed on the plate could become billions forming a colony that is visible to our naked eyes.  For example, take a look at plate T5057, there are 10 distinct bacterial colonies growing, each one containing billions of individual bacteria that are all clones of an individual bacteria from a truck handle. 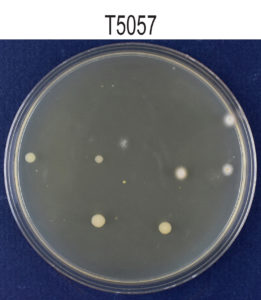 On other plates you will notice that there was a lot of growth but you can’t see individual colonies.  For example, take a look at plate T5052 from seawater.  This happens if there was a lot of bacteria on the original surface that was sampled (not just 10), when they all grow they grow together creating what we call “confluent” growth on the plate and individual colonies are no longer visible. 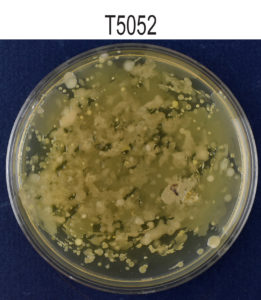 On some of the plates you’ll notice colonies that look fuzzy.  For example, take a look at plate T5081 and T5129; these are fungal colonies. Like bacteria many fungi are microscopic but when they grow they can form large colonies.  In fact, the largest known living organism on our planet is a giant fungal colony (Armillaria ostoyae) which covers 2,384 acres in an Oregon forest.  Aren’t microbes amazing! 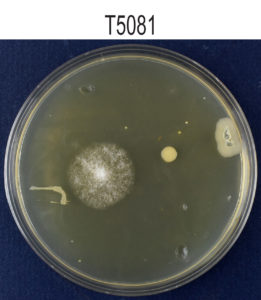 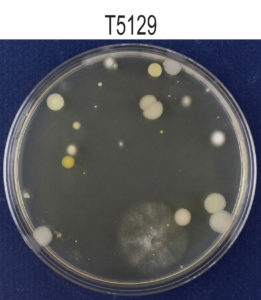 So now you can explore your plates and everyone else’s by browsing through the images.  Do you notice any patterns?  What environments had the most bacteria?  Which ones had the least?  Why do you think that might be?  Can you form a hypothesis?

For example, a lot of you decided to swab your phones (or your parents phones), and most (but not all) had only a few bacteria.  Why do you think that might be?  What surfaces had the most bacteria and which the least?  Can you think of reasons (hypotheses) that might explain these patterns?

If there are any participants out there that are doing science fair projects this year, I bet you could make a pretty good project out of this data set.  Feel free to contact me if you are interested and would like some suggestions.

Remember, microbes are all around us and yes, although there are some germs that can hurt us, most are beneficial and in fact absolutely necessary.  Without the microbes life wouldn’t exist on our planet.

With regards to questions about resources to learn more about bacteria that might be appropriate for kids, there are two resources (books) that you might be interested in taking a look at. The first is an absolute classic and was one of my own early inspirations, “Microbe Hunters” by Paul de Kruif originally published in 1926. I think you’d find it fascinating, and parents and teachers should be able to translate the stories (because that is what it is full of) into lessons.

You can click here to download a PDF version, or you can also buy a copy or, most likely, find it at a library.

The second book I’d recommend is “A Field Guide to Bacteria” by Betsey Dexter Dyer. It’s another well-written book for a more general audience. What I like about it is that it focuses on things that you can see all around you that are the result of microbial processes. I use this book as the inspiration for a workshop that I sometimes do with K-12 teachers. I take them for a hike and we look for the workings of microbes. I call the workshop the Microbial Exploratorium. I’m sure after reading the book that you would be able to do the same in your own back yard. This one isn’t available for free, but I’ve pasted the link here: http://www.cornellpress.cornell.edu/book/?GCOI=80140100959640

Finally, there are also a lot of online resources that you could access. I think that the American Society of Microbiology has some of the best out there. Here is a link to K-12 lesson plans that they have made freely available. https://www.asm.org/index.php/educators/k-12-classroom-activities

Remember, microbes are all around us and yes, although there are some germs that can hurt us, most are beneficial and in fact absolutely necessary.  Without the microbes life wouldn’t exist on our planet.