UGA Skidaway Institute of Oceanography professor emeritus and former director James Sanders was honored by the Consortium for Ocean Leadership (COL) with the 2019 Graham B. Shimmield Leadership Award for extraordinary contributions to the advancement of the organization and its mission. 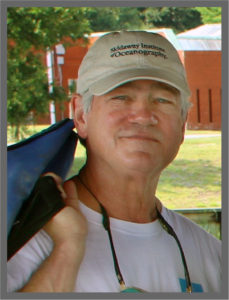 “I appreciate Jim’s financial insight and willingness to return to the board when the need arose,” COL president and CEO Jon White said. “I applaud his incredible dedication to the success of COL over his long history with the organization.

“His hard work and insights have helped our consortium at critical junctures and have contributed significantly to COL’s success.”

For the first time in its history, two trustees were presented with the award in recognition of their service to COL. Megan Davis from the Florida Atlantic University Harbor Branch Oceanographic Institute was the second award recipient.

COL is a community-based organization in Washington, D.C. working to ensure sound science underpins ocean policy and decision-making at the federal level.

Graham Shimmield was a long-time COL trustee who served as treasurer from 2013 until his death in 2016. To honor his memory, the Graham B. Shimmield Leadership Award is made annually to trustees who follow in his footsteps with extraordinary dedication and contribution to the advancement of COL and its mission.