UGA Skidaway Institute of Oceanography scientist Chris Marsay will spend the next few months on board an icebreaker, frozen solid in the Arctic ice cap. Marsay is part of a major international research project named Multidisciplinary drifting Observatory for the Study of Arctic Climate or “MOSAiC.”

The German icebreaker Research Vessel Polarstern sailed into the Arctic Ocean last fall until it became locked in the ice. It will remain there, drifting with the ice for a year, all the while serving as a headquarters for scientists to study Arctic climate change. Marsay is currently on board a Russian icebreaker making its way slowly towards the Polarstern from Norway. Here is an update.
Saturday 15th February

I’m currently on the Russian icebreaker, Kapitan Dranitsyn, heading north to join the RV Polarstern for Leg 3 of MOSAiC. We departed from Tromsø on 27th January but were subsequently delayed by bad weather and remained in a nearby fjord until 3rd February. After a bumpy couple of days crossing open water, we reached newly formed sea ice to the east of Svalbard and have been gradually making our way northward through the ice since then. We are currently travelling through thick ice at around 85.5°N. 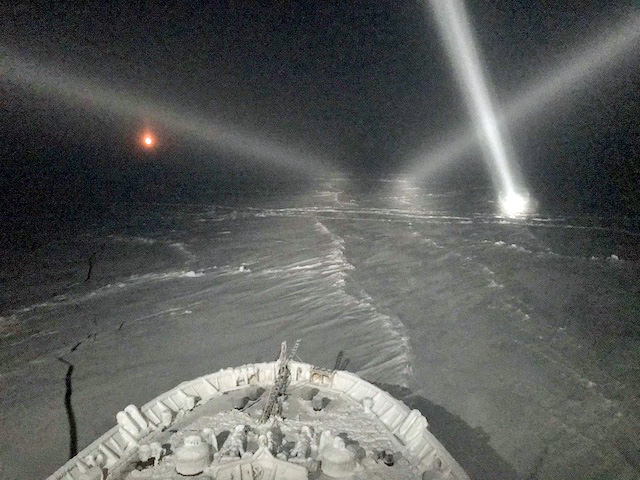 Photo taken from the bridge of Kapitan Dranitsyn in early February as we made our way through sea ice. There are three spotlights being used by the ship’s crew to help plot our way through the ice, and orange glow is the moon, sitting low on the horizon.

We’ve had temperatures occasionally down to around -31°F, with wind chill of -67°F. Although there is no necessity for us to spend time outside during the journey north, I’ve made a point of going outside for a few minutes each day to get some fresh air, and to get some experience of the conditions I’m expecting to be working in over the next few weeks. 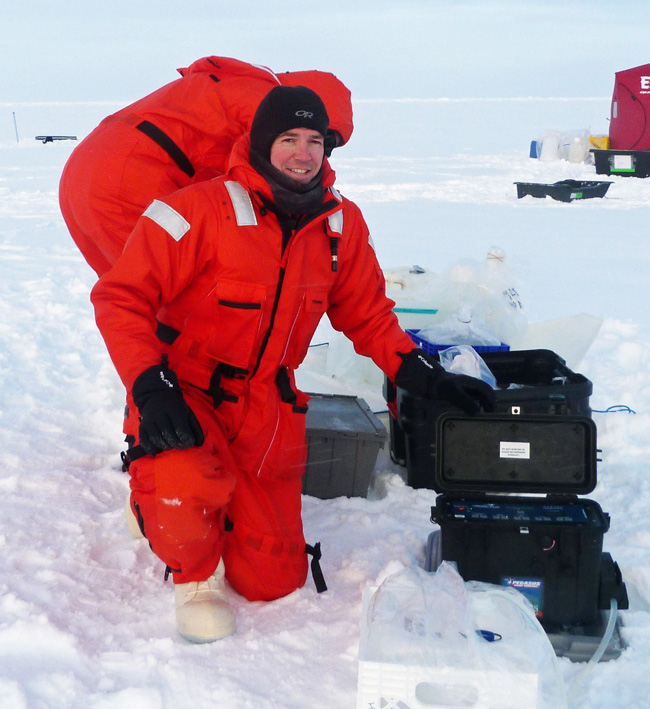 Marsay during a 2015 research cruise to the north pole.

I’ve kept fairly busy on board. There are various planning meetings that we’ve had to ensure a smooth continuation from Leg 2. I’ve also helped out with ice watch on the ship’s bridge. For this, we keep a regular log of sea ice coverage, age, and thickness – data that is useful to the sea ice specialists on board. In the evenings we have movie nights and a weekly quiz to keep us entertained. The internet connection on board is heavily prioritized towards logistical needs and so we mostly connect to the outside world though text only messages sent by WhatsApp. Consequently, there’s always a crowd to be found near the stairwells, where the connection is generally strongest.