My name is C. J. Pickett, and I traveled from the Davidson Lab at Swarthmore College to work with Marc Frischer’s lab and the amazing tunicate, the Doliolid. Tunicates are a group of morphologically-diverse invertebrate filter-feeding animals, found in marine settings around the globe. I am an embryologist and developmental biologist by training, and our lab has a collaborative effort with the Frischer Lab to understand several interesting properties of how doliolids develop. This work can only be done because the Frischer Lab has successfully cultured Dolioletta gegenbauri through their entire amazing life cycle, and thereby procured numerous healthy animals of a particular stage called gonozooids. That stage produces gametes -thus, embryos.

In both Doliolids and Ascidians, eggs rapidly develop into free-swimming, tadpole-like larva. Although obviously dissimilar to us in their adult forms, these animals are chordates, just like we are, and during embryogenesis possess chordate developmental features such as a notochord flanked by muscle, a dorsal hollow nerve cord, and pharyngeal slits. During early development, the basic organization of tunicate cells and many transcriptional events are incredibly similar, conserved over 400 million years. In the ascidian Ciona robusta, much is known about cell lineages and cell fates throughout their development. For example, after a few hours of development, we can point to one particular cell within an embryo of only 150 cells and say, “That cell is specified and will divide to generate the future heart and pharynx in the adult.” Remarkable.

Broadly, we are interested in the genomic changes behind how animals acquire morphological traits over evolutionary time. My doliolid project involves examining early cell lineages and tracing those cells through development. Because Doliolids have novel features such as circumferential muscle bands that provide their pelagic propulsion, I am interested in the origins of those traits- both the cellular origins during early development as well as the genomic features behind gene expression patterns responsible for differentiating those lineages. Comparing doliolid and ascidian development can uncover evolutionary rules used by the organisms in their long-term adaptations to unique environments.

I was eager to finally see them in person; after several false starts and cancelations, the trip felt a long time in the making. While being shown around by Dr. Frischer the morning after I arrived I was full of anticipation and anxious to get to work. In the temperature-controlled room, six four-liter jars of oceanic seawater revolve ever so slowly on the Frischer Lab’s custom plankton wheel, each harboring the gently drifting gonozooids who, when I arrived, were beginning to spawn. Guided by the Frischer Lab’s expertise, by my fourth day I was versed in their basic care and was examining jars for egg clusters on my own three to four times a day, around every four hours. Locating them is not trivial. The eggs are small, around three-tenths of a millimeter in diameter, and they are also crystal clear. However, they are released in clusters of three to eight eggs, once up to thirteen, and with much patience and proper illumination they can be managed to catch the light and reveal themselves to the trained eye. From the culturing room, egg clusters were taken in a glass dish and brought into the laboratory adjacent for examination under a stereo microscope. Ideally, I would catch egg clusters just prior to first cleavage, however, it was often the case that an egg cluster would contain differing stages of development: e.g., an eight-egg cluster may have three unfertilized eggs, two 2-cell embryos, two 32-cell embryos, and one at the neurula stage (where the epidermis rolls up on itself forming the nerve cord). For the two plus weeks I retrieved eggs and examined them microscopically several times a day, my enthusiasm never faded while looking for fertilized and developing eggs; this was aided by the fact that tunicate embryos are stunningly beautiful under the microscope. 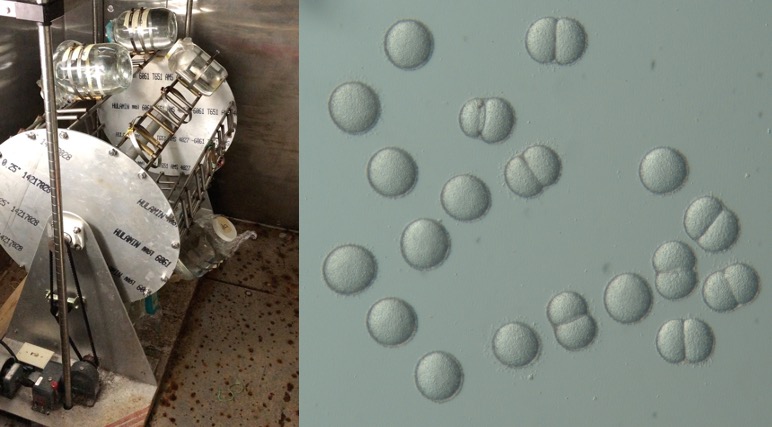 The plankton wheel gently revolves jars containing the gravid gonozooids; two to three clusters of eggs which have been disassociated, several of which are cleaving for the first time.

It became clear after the first week or so that I was not going to be able to experimentally manipulate the embryos as I had hoped. This was due to a few reasons, including what appeared to be a random spawning cycle as well as likely internal fertilization. Injecting eggs requires timed fertilizations, and in vitro fertilization seemed not possible -disappointing but not surprising based on fertilization properties of other tunicates. I then shifted back to my main goal, which was to procure many differently-aged (staged) embryos for fluorescent confocal microscopy, which would ideally generate images for 3D reconstructions of all the main developmental stages. I was able to collect embryos at 1-cell, 2-cell, 4-cell, 8-cell, 16-cell, 32-cell, gastrula-staged, neurula-staged, and many stages of tailbud embryos. Additionally, I was able to collect juvenile stages where the notochord-filled tail was being resorbed into the body of the developing adult, as well as other life stages such as oozoids (the first non-embryonic stage) and small gonozooids (not yet gravid). All of these embryos were placed in fixative and brought back to Swarthmore to be stained and imaged and analyzed.

Back at Swarthmore, I am still collecting data via confocal microscopy of fluorescently-labeled embryos as well as time-lapse video analysis of their development. There is also much work involved in post-imaging analysis. However, I can already say that the images are spectacular, a reflection of the embryos themselves, as well as biologically revealing. Keep an eye out for their publication.

I am grateful for the privilege of working with the Frischer Lab and of course the doliolids.

Although I gained much in the way of data and experience, there is so much to learn and we have barely scratched the surface of doliolid development. They are remarkable animals that deserve more of the scientific limelight, not just for their beauty, developmental peculiarities, and their holding of clues by which we may understand the evolution of trait acquisition, but also for their incredibly complex and important role they play in marine ecosystems. Thank you for having me and I sincerely hope I am able to return to SkIO and the doliolids in the not-distant future.