Beginning in 1970, the Georgia Department of Natural Resources built a series of artificial reefs to provide habitat for marine life. However, until recently, there were gaps in some of the key information about those reefs, such as the precise locations of the materials placed on the bottom and water depth over the materials. Now, researchers at the University of Georgia Skidaway Institute of Oceanography are using cutting-edge bathymetric side-scan sonar and high-resolution geographic positioning systems (GPS) to provide coastal managers and fishermen a detailed picture of the location and condition of reef materials.

Georgia’s shelf is relatively shallow and extends approximately 80 miles offshore before dropping into the deep ocean. Most of the shelf bottom consists of shifting sand, which does not provide the kind of conditions to develop and support diverse reef communities.

“Much of the continental shelf is like a vast sandy desert,” UGA Skidaway Institute scientist Clark Alexander said. “So, what we need is more hard substrate, because that is really the most important thing for establishing stable live-bottom communities.”

Over the past 50 years, the state has placed hard-surface materials in 18 sites, each about 15 square kilometers in size. Eight of the sites are located along the coast approximately 10 miles off shore and another eight approximately 25 miles off shore. There are also two “beach reefs” that are closer to shore and accessible to fishermen with smaller boats. The reefs are made up of a wide range of materials, including old ships, battle tanks, pieces from the original Talmadge Bridge, retired subway cars from New York City, concrete pipes and pilings, and purpose-built, concrete tetrapods. 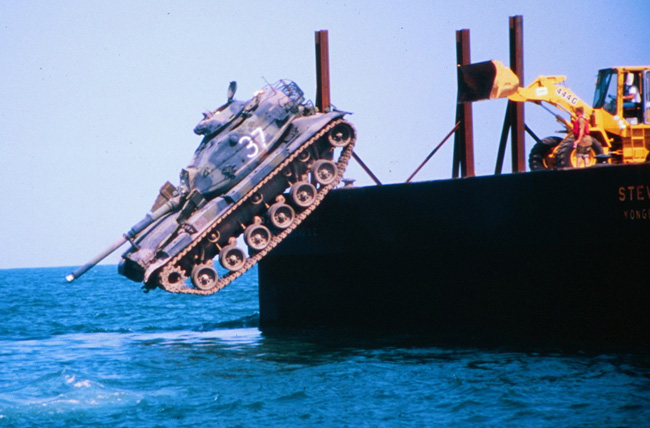 A battle tank is pushed into the ocean to form part of an artificial reef. Photo credit: Georgia DNR.

“The materials that were placed on the bottom in the 1970s and 1980s were sunk in place or deployed from barges using Loran-C, a radio-based navigation system that was significantly less accurate than current GPS, or dropped from Army helicopters, so their precise locations are not always exactly known,” Alexander said. “In addition, we have had a number of hurricanes and winter storms come through or offshore Georgia, and we don’t know whether some of the material has been moved from its original location.”

Alexander proposed a program to survey the reefs and develop a more accurate set of data on their locations and characteristics, which was subsequently funded through the Georgia Coastal Management Program, administered by the Georgia Department of Natural Resources Coastal Resources Division.

“Our goals were to document the status of what is on the bottom, and to give more precise locations for the objects we identify,” Alexander said. “We used real-time kinematic GPS, so we know within a few centimeters where things are on the bottom.”

Alexander’s team began field work in 2018 and continued into 2021, using the 28-foot RV Jack Blanton. They spent an average of six days surveying each reef. They started with the beach reefs to work out any kinks in the planned survey approach and then moved on to the reefs 10 miles off shore. Along with high-resolution GPS, the team used an interferometric side-scan sonar that gives the depth and co-registered side-scan sonar imagery that provides images of the seafloor and objects sitting on it. 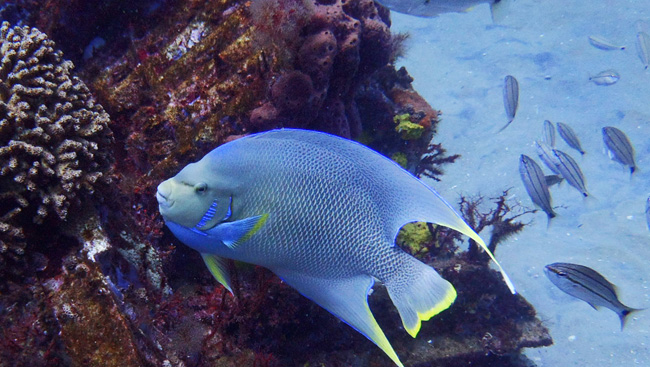 “Based on an object’s general location, and existing location data, we were able to make some good guesses as to ‘Oh, that must be a certain barge or ship’ and so on,” he said. “And we found a few objects that were not on existing maps and several others that had fragmented into several pieces since being placed.”

Another important parameter the team measured was the amount of clearance between the various structures and the ocean surface.

“You don’t want to have to worry about anything you put down being a hazard to navigation,” Alexander said. “Ten kilometers off shore, you are in about 10 meters of water or so, about 30 feet. So, if one of these sunken vessels was sticking up a significant height above the bottom, that is something you need to know.”

Alexander and DNR are making plans to survey the eight reefs that are about 25 miles off shore. They present a greater challenge than the reefs closer to shore. The longer distance means greater transit time and less time on-station actually conducting the survey. The team would also be constrained by the weather. Conditions must be very good and forecast to remain calm throughout both the transits and survey.

“Because when you are that far offshore, you are at the mercy of sea conditions, which can change quickly” Alexander said.

The data Alexander’s team collected is now being added to the DNR’s marine artificial reef fishing website. These new data products enhance the data available to anglers, and now allows users to zoom in to the individual features, see what they look like, and how they are distributed in relation to other features on the bottom. The data collected by the project can be found on the DNR’s artificial reef website: https://coastalgadnr.org/HERU/offshore