Savannah, Ga. – University of Georgia Skidaway Institute of Oceanography scientist Catherine Edwards is part of a research team that has received an $18.8 million grant to continue studies of natural oil seeps and track the impacts of the BP/Deepwater Horizon oil spill in the Gulf of Mexico ecosystem.

Known as ECOGIG-2 or “Ecosystem Impacts of Oil and Gas Inputs to the Gulf,” the project is a collaborative, multi-institutional effort involving biological, chemical, geological and chemical oceanographers led by the University of Georgia’s Samantha Joye. The research team has worked in the Gulf since the weeks following the 2010 Macondo well blowout.

The three-year, $18.8 million ECOGIG-2 program was funded by the Gulf of Mexico Research Initiative, or GoMRI.

“Our goal is to better understand the processes that have affected the oil spill since 2010,” Edwards said. “How the droplets were dispersed? Where the oil went?  How it was taken up by small microbes and also the effects on animals further up the food chain?”

Edwards’ role in the project is to use autonomous underwater vehicles, also called “gliders,” to collect data on conditions around the spill site. Equipped with sensors to measure characteristics such as depth, water temperature, salinity and density, the gliders can cruise the submarine environment for weeks at a time, collecting data and transmitting it back to a ship or a shore station. 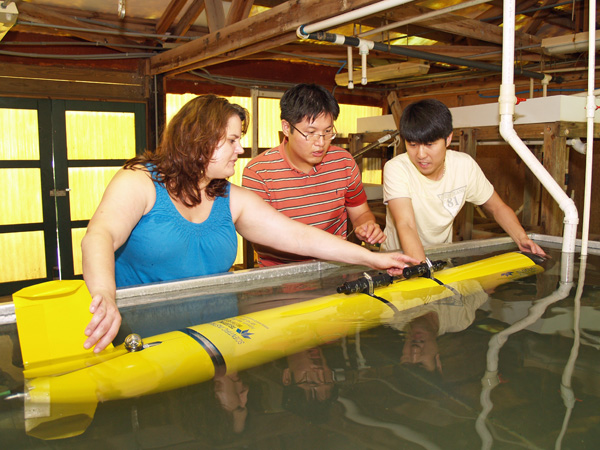 The gliders will operate both in conjunction with shipboard instruments and also independently. One advantage of using the gliders is they can operate during storms and rough weather, when it may not be possible to use ships. Edwards said shipboard work doesn’t always give a full picture of ocean dynamics simply by the fact that they can only go out when the weather is reasonably clear.

When working in conjunction with research ships, the gliders can provide additional observations, significantly improving the quality of the data set.  The gliders also report dissolved oxygen concentrations and optical measurements of chlorophyll and organic matter, and may also be used as a test vehicle for new instruments in development.

Edwards will use “GENIoS,” a new software package, to help navigate the gliders. GENIoS uses high-resolution forecast models of wind and ocean currents, along with information from the glider itself, to calculate the optimal path for the gliders. This will improve the quality of the scientific data collected.

GENIoS is a collaboration among Edwards, Fumin Zhang from the Georgia Institute of Technology and their two Georgia Tech Ph.D. students, Dongsik Chang and Sungjin Cho. GENIos has been tested for more than 210 glider-days on the continental shelf off Georgia and South Carolina. This experiment will be its first test in the Gulf of Mexico.

Edwards also hopes to use this project to test the gliders as platforms for new, experimental sensors developed by other members of the ECOGIG-2 team.

For additional information, contact Catherine Edwards at (912) 598-2471 or catherine.edwards@skio.uga.edu.