At 4 o’clock on a warm, humid August morning, Quintin Diou-Cass stood on a dock at the University of Georgia’s Skidaway Institute of Oceanography collecting water samples at low tide from the Skidaway River estuary. Diou-Cass attends Susquehanna University in Pennsylvania and was a summer intern at Skidaway Institute. His water collection will be used in experiments in conjunction with UGA graduate student Sean Anderson, who is conducting a year-long study in the Skidaway River estuary. They are trying to determine the rate that tiny marine animals called microzooplankton are consuming single-cell marine plants known as phytoplankton.

“The microzooplankton are the primary consumers of phytoplankton. We want to know how fast they are munching on them,” Anderson said. 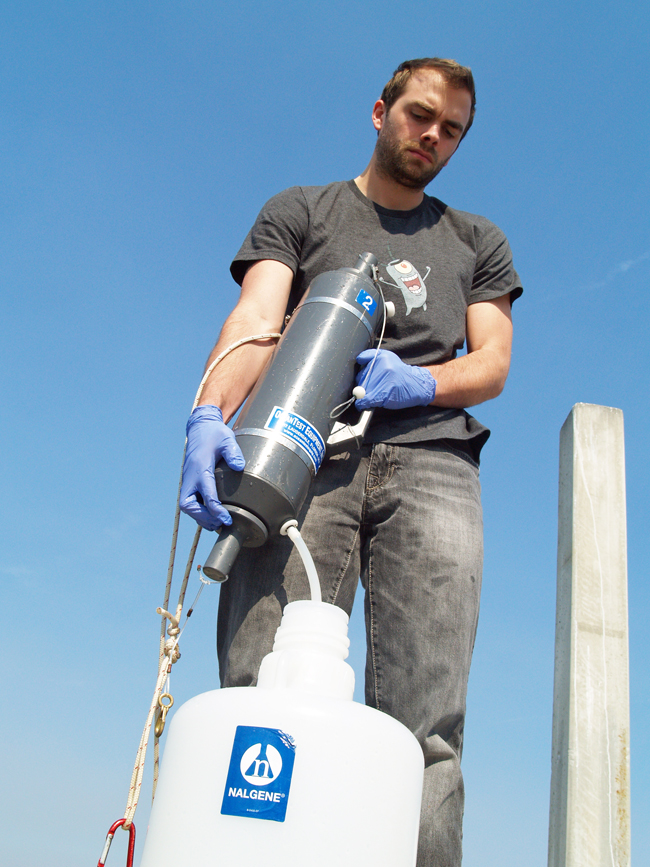 Sean Anderson transfers a water sample from the collection bottle.

Although so small they can be seen only with a microscope, phytoplankton are a major part of the marine ecosystem. They form the very base of the marine food web and produce approximately half the oxygen in the atmosphere.

According to Anderson’s advisor, Skidaway Institute professor Elizabeth Harvey, the researchers ultimately want to be able to better predict grazing rates, but first they must understand some of the fundamental principles.

“By being able to monitor this grazing process every week over the course of a year, we can look at fluctuations and also understand the plankton community,” she said. “We can also see what different organisms are out there and see how that impacts grazing rates.”

A key question in the summer study is whether the grazing rates vary according to the tidal cycle and time of day. The answer could influence the way other scientists conduct plankton research.

”Some researchers may just go out and sample at whatever time is convenient to them,” Anderson said. “We want to find out if the collection time actually matters.”

Anderson and Diou-Cass shared the workload. Anderson collected samples at high tide and analyzed what he found. Diou-Cass conducted the exact same experiment on the same day, except he collected his samples at low tide, which is why he was working on the Skidaway Institute dock at four in the morning. The concentrations of phytoplankton fluctuate and over time scales of hours, requiring frequent sampling. 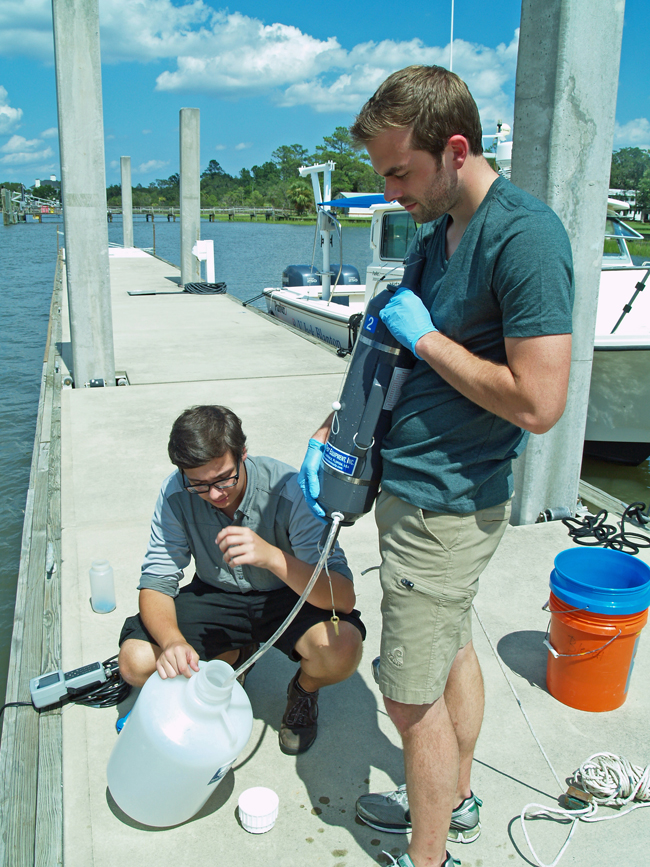 “It is hard work and requires a lot of effort and time, but it is definitely needed to capture what is happening,” Anderson said.
That hard work is paying off. The team is finding significant variations between the two data sets. The low tide samples seem to be unpredictable, but it appears that the grazing rates are higher.

“We want to find out why that is,” Diou-Cass said. “We have some ideas but we need to analyze a lot more of our data to figure it out.”
To measure the grazing rates, Anderson and Diou-Cass determined the phytoplankton concentration of each sample and then put the water samples into sealed plastic bottles. The bottles were placed in a special tank that mimicked the natural conditions of an estuary in terms of light and temperature.

“We are trying to provide the phytoplankton with realistic conditions,” Anderson said.

After a period of time, they recovered the samples and again measured the phytoplankton concentration. By comparing the before-and-after data, they could determine how much was lost to grazing.

The team also performed other tests on the water samples, including counting and identifying different species of plankton using the sophisticated imaging instruments in Skidaway Institute’s Laboratory for Imaging Microbial Ecology.

Harvey praised both her students. She credits Anderson for leading the effort and committing to a year-long project of frequent sampling. She said Diou-Cass was a pleasant surprise.

“This is a huge project for an undergraduate, but he has been phenomenal,” she said. “I got very lucky with both of them.”

The three share more than a love of research. It turns out all three of them grew up within 60 miles of one another on the coast of Maine.

Diou-Cass returned to school at Susquehanna University in September. Anderson will continue the project, but with a less intensive sampling schedule. They hope they will be allowed to present their work at the Association for the Sciences of Limnology and Oceanography’s Ocean Science Conference in February.