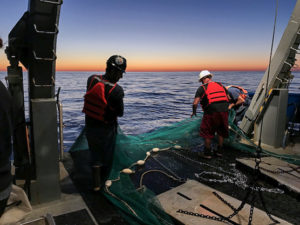 Crew members on the R/V Savannah deploy a trawl net at sunset. Photo by Victoria Green

I was still getting my bearings as one of four new education interns at the Marine Education Center and Aquarium on Skidaway Island, when I was whisked away to the open ocean to learn about life aboard the R/V Savannah. In October, Marc Frischer, a professor at UGA’s Skidaway Institute of Oceanography, offered the new marine education interns the opportunity to participate in a research cruise for his project studying a type of zooplankton called doliolids.

We traveled about 40 nautical miles off the coast of Georgia to collect samples of the small, gelatinous, zooplankton. Despite the distance from shore, the water depth was never more than 40 meters (roughly 131 feet) due to the gentle sloping of the continental shelf. Frischer’s graduate students and field researchers deployed instruments to measure water quality data, including temperature, conductivity (proxy for salinity) and dissolved oxygen. We were able to help collect data, deploy instruments, and sort the fish caught in the trawls. 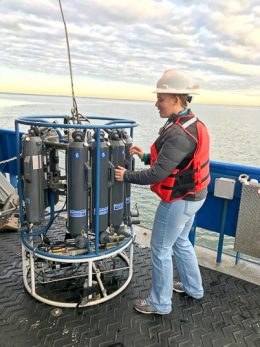 Green makes a few last minute adjustments on a water sampling device before it is dipped in the ocean.

Collecting the doliolids, which are barrel-shaped creatures that are roughly the size of a dime and completely translucent, involved the use of a very fine net. Once onboard, the organisms were quickly processed and preserved. I spent a lot of time observing these fascinating zooplankton under a microscope!

After a long day of sampling and traveling, we successfully collected enough doliolids for Frischer and his team to study back at the lab at Skidaway Institute.

Why study doliolids?
Phytoplankton (single-celled marine plants) are the base of the marine food web and are responsible for 70 percent of earth’s atmospheric oxygen. It’s important to understand the complex interactions of phytoplankton and the organisms that eat them – zooplankton. Gelatinous zooplankton, like doliolids, are expected to increase in abundance as our oceans continue to warm and acidify. Basic research on predator-prey interactions, even on a microscopic scale, will help us answer fundamental questions about our largest ecosystem – the open ocean.

In my first two months as an intern with UGA Marine Extension and Georgia Sea Grant on Skidaway Island, I’ve learned how the faculty and staff there value their partnerships with educators, researchers and industry. The rest of the education interns and I benefited from connecting with our neighbors at the Skidaway Institute of Oceanography and learning more about the research happening there. For me, I was finally able to achieve my dream of joining a research cruise. With my first voyage under my belt, I have a newfound respect for the hardworking scientists and crew who live and work on a rocking laboratory, conducting science to inform policy decisions about marine resources that will make the Georgia coast healthy and productive for the future.