University of Georgia Skidaway Institute of Oceanography researcher Jay Brandes was invited to participate in a congressional briefing titled, “The Ocean Plastic Pollution Problem: Solvable with Science Innovation, and Education.” The briefing was sponsored by the Coalition for Ocean Leadership in conjunction with the House Oceans Caucus and was held in the Rayburn House Office Building in Washington, D.C., on Tuesday, June 12.

Brandes has been studying the presence of microplastics in Georgia’s coastal waters and represented the research community on a three-person panel. He was joined on the panel by John Racanelli, president and CEO of the National Aquarium, and Scott DeFife, vice president of government affairs of the Plastics Industry Association. 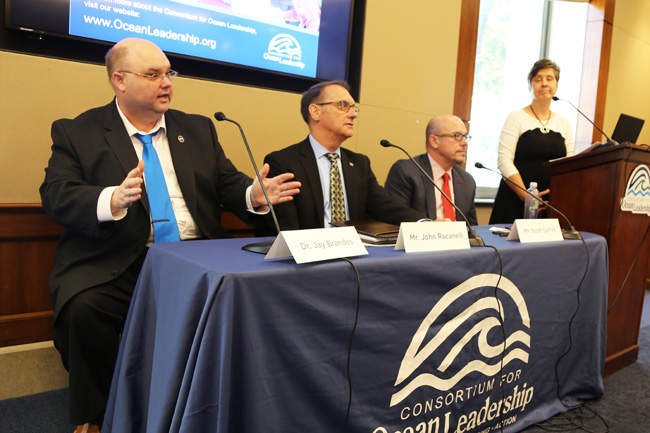 UGA Skidaway Institute scientist Jay Brandes (left) discusses marine plastics at the congressional briefing. He was joined on the panel by John Racanelli, president and CEO of the National Aquarium (center), and Scott DeFife, vice president of government affairs of the Plastics Industry Association.

Trash in the ocean is a growing problem. House Oceans Caucus Co-Chair, Rep. Suzanne Bonamici, said that the equivalent of one garbage truck of trash enters the ocean every minute. Plastic trash in the environment is particularly detrimental due to plastic’s inherent durability and resistance to biological break down. Plastic products may also release potentially dangerous chemicals as they break down. Current estimates project 155 million tons of plastic in the ocean by 2025.

The three experts agreed that plastics in the environment is not entirely an industry issue but also a consumer problem resulting from bad behavior, such as littering, lack of recycling and the over-use of single-use plastics. It often enters the ocean from overflowing trash and recycling bins, or because waste containers are not readily available.

Brandes reported that microplastic pollution varies widely, with high concentration areas often adjacent to low concentration areas, and cautioned that understanding dynamics in one area does not translate across the globe. He stressed that including citizen scientists — engaged citizens trained by scientists to collect samples — in research could help gather more data across the world.

He pointed out that plastics are not totally resistant to biological breakdown.

“If we can cut down on the source of plastic into the environment, nature will do a good job cutting down on the presence,” he said. “We’ve seen that bacteria can break down some plastics.”

Audience questions ranged from health impacts and how to talk about the issue in non-coastal states to a reduction in consumer recycling and plastic alternatives for the fishing industry. Racanelli said, “everyone is downstream from someone,” explaining that plastic in the environment effects everyone.

All panelists agreed that while more time, money and research is needed to understand the problem, the solutions should start now and involve everyone. Tiny pieces of plastic are so pervasive in Georgia’s coastal waters, researchers estimate there are more than a trillion microplastic particles and fibers in the top foot of the state’s inshore waterways.