A team of University of Georgia investigators is working on a murder mystery, not your everyday who-done-it, but one in which the investigators are scientists, and the victims are thousands of tiny oyster larvae.
The mystery began the in the summer of 2017 at the UGA Shellfish Research Laboratory, a unit of UGA Marine Extension and Georgia Sea Grant on Skidaway Island near Savannah. The shellfish lab is leading a movement to develop oyster aquaculture in Georgia and operates the state’s only oyster hatchery. 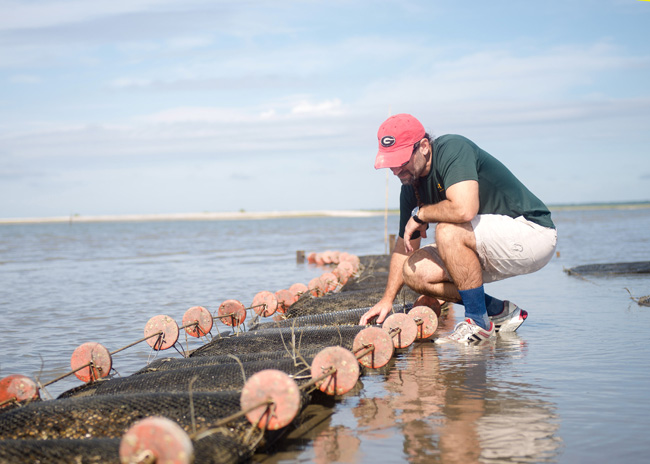 One day, as they frequently do, the oyster hatchery team changed the water in the tanks containing oyster larvae. The team pumped water from the Skidaway River behind the lab and ran it through filters before introducing it to the larvae tanks. At this stage in their life cycle the oysters are free swimmers — not having developed a shell or attached to any surface — and they are tiny, only a tenth of a millimeter in diameter. When the team arrived at work the following day, they were shocked.

“We came in the next day and we had lost 80 to 90 percent of our larvae,” Tom Bliss, director of the shellfish lab, said. “The day before, they were perfectly healthy, then overnight they went.”

They quickly concluded the mortality must have been connected to the water change, but they had no idea what substance or organism in the water was responsible. To find some answers, they approached UGA Skidaway Institute of Oceanography researcher Elizabeth Harvey. Harvey’s research focuses on one likely culprit — microscopic marine algae known as phytoplankton. She and her students regularly and frequently sample and test water from the river.

“We thought this was interesting, because we like algae in general,” Harvey said. “But we also thought we could help the shellfish lab answer some of their questions.”

Sean Anderson, a UGA graduate student and a member of Harvey’s team, was in the middle of a lengthy project to collect and study phytoplankton samples from the Skidaway River on a weekly basis. 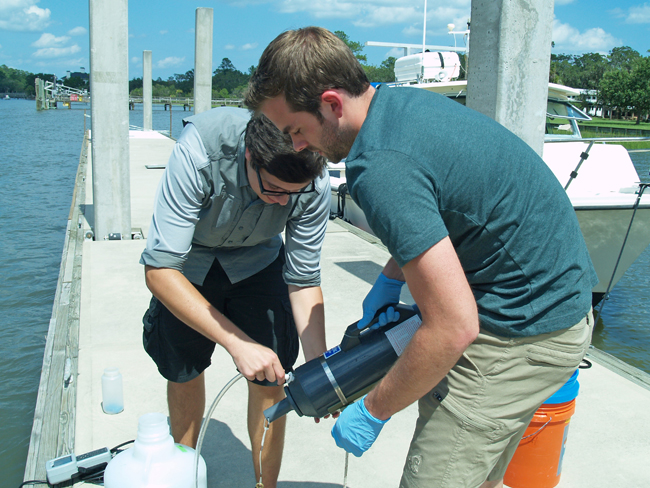 Coincidentally, Anderson had collected samples the same day as the water change. He observed a large concentration of a particular phytoplankton species, akashiwo sanguinea, which is considered a harmful algal species. Some algae species produce toxins that are harmful to other marine life, and some can produce large blooms, like the red tide phenomena that has closed beaches and caused other problems in Florida.
Armed with that information, Harvey obtained additional data from the Phytoplankton Monitoring Network, a group of UGA Marine Extension and Georgia Sea Grant volunteers who collect and monitor water samples from the Skidaway River for phytoplankton and harmful algal blooms on a weekly basis.

“We were able to match other times when the hatchery has seen similar events with times when the phytoplankton volunteers observed high concentrations of that particular algae,” Harvey said.

Harvey and Bliss are fairly certain they have found the source of the problem, but they are still unclear how the algae are harming the oyster larvae, and, more importantly, how to prevent it in the future. This particular species of algae does produce a toxin. It also produces a sticky substance that has killed birds during blooms on the west coast by damaging the water proofing on their feathers.

“We don’t know if the oysters are ingesting the algae and the toxin along with it, or if the algae is getting broken apart in the filtration process,” Harvey said. “Or if this sticky substance is the problem.”
Identifying the phytoplankton that is the source of the problem is just the beginning. There are many unanswered questions. Does this algae species also affect oysters in the wild? What prompts an algae bloom? What is the actual killing agent affecting the oyster larvae? Is there a pattern to the blooms?

If a bloom can be predicted, the hatchery team can take preventative steps to protect their oyster crop. “If we know there is going to be a bloom, we can avoid bringing in water,” Bliss said. “We need to know if the toxin breaks down after 24 or 48 hours, or if there is a way to filter it out.”

Luckily, oyster consumers are safe. Harvey notes that the algae is not harmful to people who eat oysters that have been exposed to the algae.

Harvey and Bliss plan to continue to research the issue. A graduate student from the UGA Department of Marine Sciences has been added to the research team to work on the project. She is supported by the Friends of the UGA Aquarium. Harvey believes it is important to follow up with additional work, because there is no data about algal blooms in Georgia. “It would be nice to have some baseline knowledge of things that are happening here before it gets to be a serious problem,” she said. “That is the ultimate goal of scientists, to understand a system before we need to understand it, and it’s rare that we get a chance to do that.”