UGA Skidaway Institute of Oceanography scientist Chris Marsay is currently onboard an icebreaker ship that’s frozen solid in the Arctic ice cap. Marsay is part of a major international research project named Multidisciplinary drifting Observatory for the Study of Arctic Climate or “MOSAiC.” The German icebreaker Research Vessel Polarstern sailed into the Arctic Ocean last fall until it became locked in the ice. It will remain there, drifting with the ice for a year, all the while serving as a headquarters for scientists to study Arctic climate change. Here is an update from Chris.

Time is passing quickly on the RV Polarstern. I joined the ship at 88 degrees north a month ago, as part of the Leg 3 team of MOSAiC. At the time, the sun was still below the horizon, as it had been for Polarstern since early October. The temperature during my first week on board was around -40F, with wind chill of down to -75F. The sun returned on March 12 and, since the end of March, it no longer sets for us. We are currently at about 84.5 degrees north and continue with a mostly southward drift. 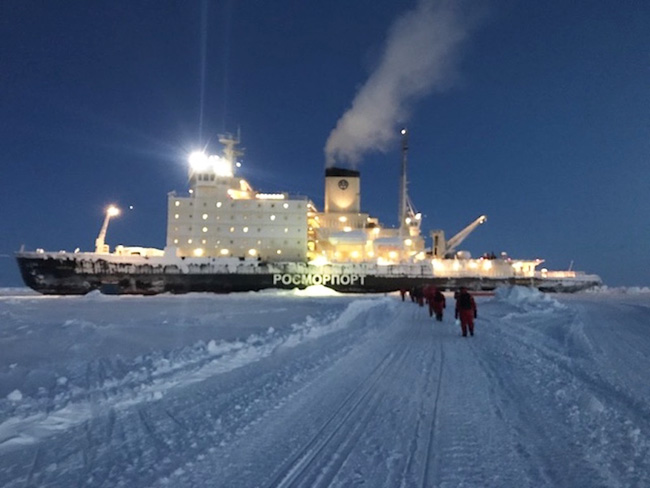 MOSAiC Leg 3 scientists on their daily commute back to Russian ice breaker Kapitan Dranitsyn from Polarstern during the transfer period in early March.

My working hours on board are split between collecting and processing samples of snow, ice cores and seawater for measurements of beryllium-7, and aerosols for measurements of beryllium-7 and trace metals such as iron. Beryllium-7 is a naturally occurring isotope produced in the atmosphere by cosmic rays striking molecules of other elements. After formation, it quickly becomes associated with small particles (aerosols) and is carried to the Earth’s surface. By calculating the inventory at the surface — in this case, distributed between snow, sea ice and seawater — we can calculate a deposition rate. By measuring the ratio of beryllium-7 to other elements in aerosols, we can then also calculate the deposition rate of those elements. The elements we are interested in include several that are nutrients for plankton in the surface ocean, including iron and zinc, and others that are pollutants, such as lead. 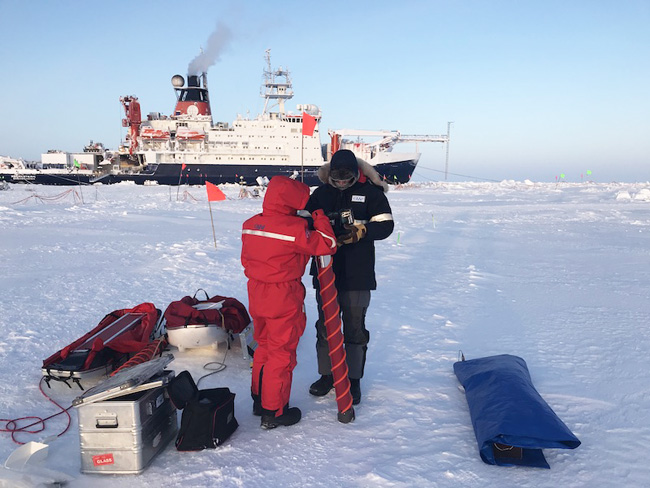 Two of my colleagues set up equipment to collect an ice core with the Polarstern in the background. 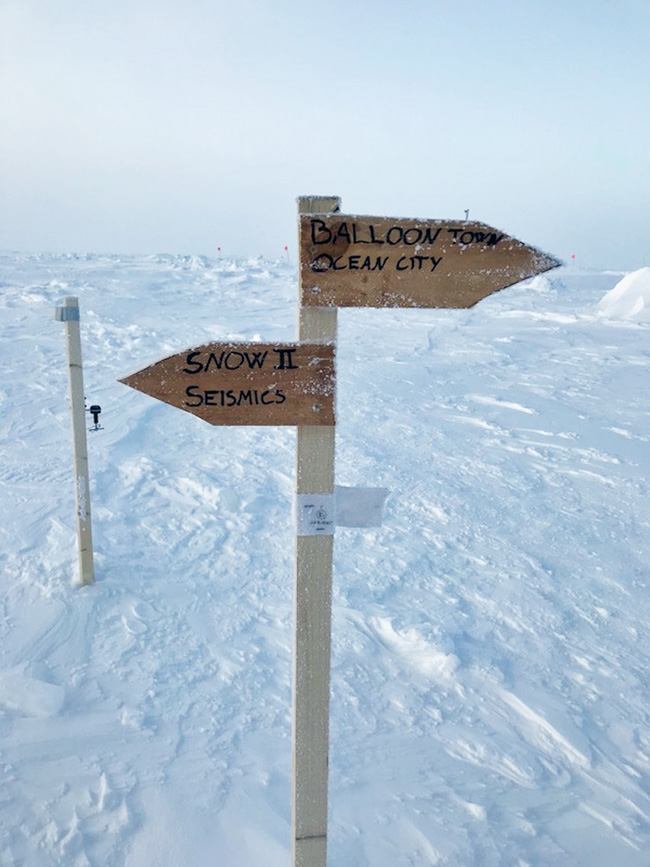 One of the signs erected on the ice-floe to help people find their way between sampling sites.

In between this work, I also help out colleagues as part of an ice-coring team to collect multiple cores for different projects. My job is to look out for polar bears on the ice, although there have been no polar bear sightings yet during Leg 3. I also observe the ice conditions from the ship’s bridge. 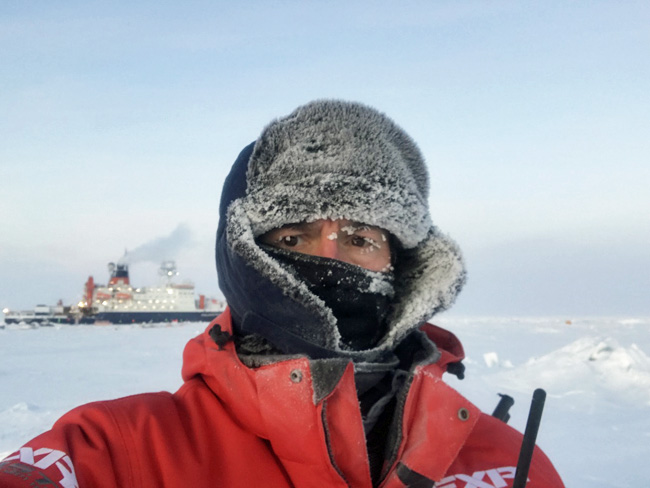 Chris Marsay two hours into a shift as a bear guard, with Polarstern in the background.

For those of us who have been at sea since late January it has been kind of surreal to follow the coronavirus pandemic developments back home, with lifestyles being increasingly restricted while we, in the middle of the Arctic Ocean, are carrying on our unusual daily schedules as normal. That is not to say there has been no disruption caused for us. The first couple of weeks of April were scheduled for the changeover between Leg 3 and Leg 4 of MOSAiC, but this plan was made impossible by the travel restrictions imposed. We are currently waiting to hear about several alternative plans that are being developed, which will see us travel back to land anytime between mid-May and the end of June. Opinions on board are pretty varied about whether it would be more favorable to get back as soon as possible or stay onboard for as long as we can. 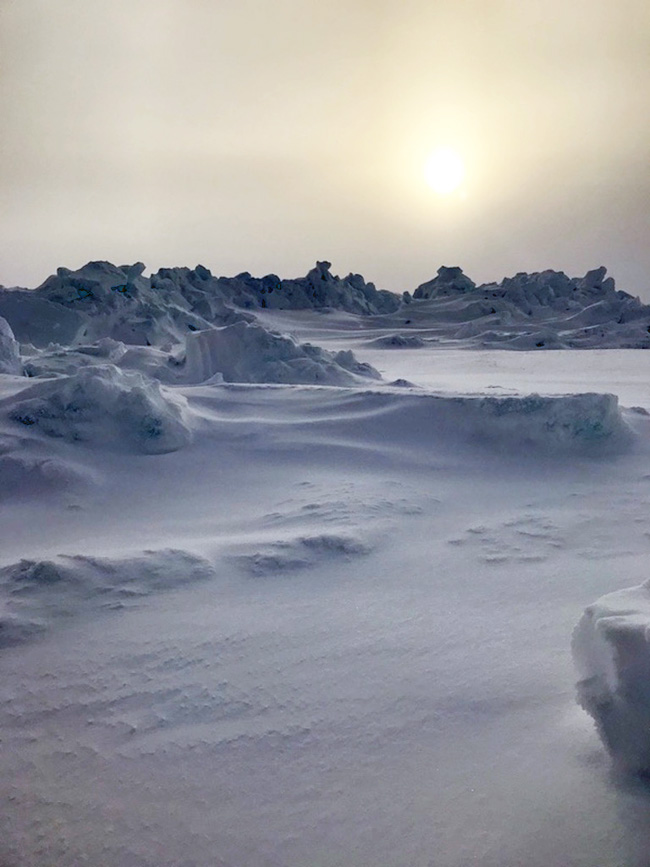 A ridge formed by ice floes moving towards each other. 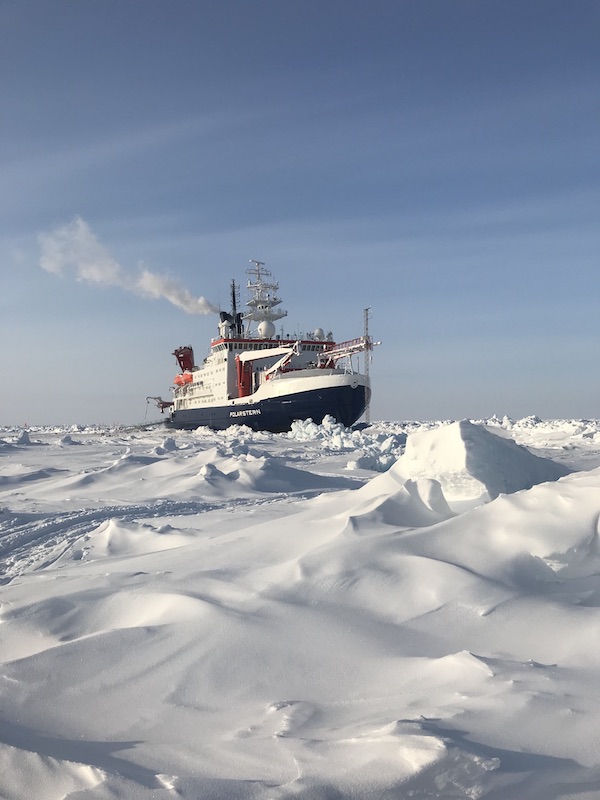