A new equipment system is providing researchers at the University of Georgia Skidaway Institute of Oceanography greater capability to study the extremely rare, but essential chemicals in the ocean.

Trace elements, like iron, cadmium and zinc appear in the ocean in very small concentrations, yet they are vital for many oceanic processes. For example, the relative abundance or scarcity of iron is often the limiting factor for the growth of microscopic marine plants known as phytoplankton. These single-cell marine plants serve as the base of the marine food web and also produce about half the oxygen in our atmosphere. 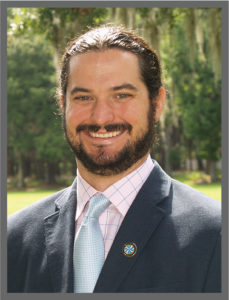 According to UGA Skidaway Institute scientist Clifton Buck, measuring and studying trace elements in the ocean is a significant challenge.

“The concentrations we’re talking about are just so incredibly small, down to parts per billion and parts per trillion, and, so, one of the of the challenges that we face is how to collect water samples in a way that we don’t introduce contamination into the water that we’re trying to collect,” Buck said.

Because the concentrations of chemicals in the water is so small, the metals that may leach from a steel equipment frame or even a steel-hulled ship can be enough to affect the purity of a water sample.

Buck, fellow UGA Skidaway Institute researcher Daniel Ohnemus and marine superintendent John Bichy applied to the National Science Foundation for funding to obtain a system of highly specialized equipment that will give UGA Skidaway Institute’s Research Vessel Savannah the capability of collecting contaminant-free samples in coastal waters. The system–manufactured by SeaBird Scientific–is based on a frame, called a rosette. The rosette is built of aluminum and titanium components which greatly reduces the contamination risk because these metals do not readily dissolve in seawater. 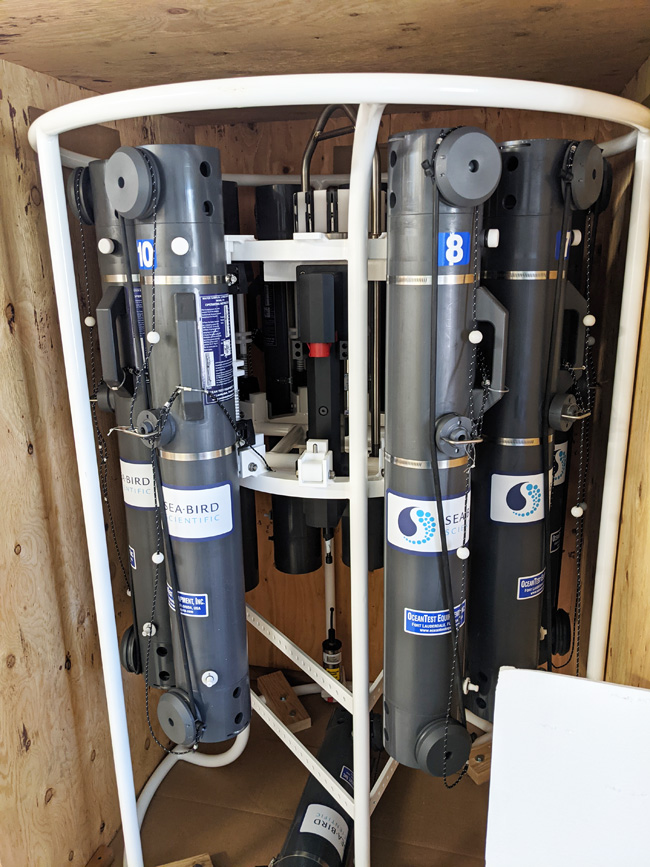 The trace metals rosette in its packing crate.

The frame itself is also “powder coated” to provide additional protection. It can collect water samples from as deep as 2,000 meters. The rosette holds 12 plastic collection bottles that can be triggered to close by sending electrical signals from the surface. It also carries a number of sensors that measure characteristics such as pressure, temperature, salinity, oxygen concentration and more.

“So that really gives us a lot of power now, to be able to do relatively high-resolution sampling of the waters around the South Atlantic bight and out to the Gulf Stream, using the RV Savannah as a platform,” he said.

Buck and his colleagues are also working with Woods Hole Oceanographic Institute, which is building a specially designed winch with a dedicated non-metallic cable.

The system will be available for use by scientists outside of UGA Skidaway Institute. Researchers can use the R/V Savannah through the University-National Oceanographic Laboratory System to study coastal waters from Chesapeake Bay to the western Gulf of Mexico. They can also request the equipment be shipped to them to use temporarily on their own research vessels.

Equipping the R/V Savannah, which typically operates in continental shelf waters, reflects a shift in focus for Buck and the trace elements community as a whole. In the past, the emphasis of most trace element research was on the deep ocean, with lengthy transect cruises, thousands of miles long, that mapped trace elements across a wide stretch of ocean.

“Trace element scientists are really starting to focus more along the margins, things like rivers,” Buck said. “And the actual continental shelf sediments themselves are big influences on trace elements and as a supply and as removal functions.

“So, we are getting into using smaller ships going into shallow water, and doing what we call process studies, wherein you identify some sort of process that you think might be happening in a region, and you spend some time there to, to really kind of tease out the relationships, whatever they may be.”