You don’t have to be a professional scientist with an advanced degree to make a meaningful contribution to scientific research. That is one conclusion of a recent paper by Dorothea Sanders, an educator at the University of Georgia Marine Extension and Georgia Sea Grant, and UGA Skidaway Institute of Oceanography researcher Jay Brandes. The article was published in the winter issue of Current: The Journal of Marine Education.

The paper focuses the researchers use of “community scientists” in a project to study the extent of microplastic pollution on the Georgia coast. The community scientists are volunteers, without extensive training or graduate degrees in the field.

The initiative began in 2018 when Brandes and Sanders were faced with the daunting task of collecting monthly water samples at 12 different sites along the Georgia coast, but without a large team to conduct the field work. The previous summer, a UGA undergraduate student, Jacob Mabrey, demonstrated that using community scientists to fill the gap might be the answer. Mabrey spent the summer travelling up and down the coast and collected dozens of samples.

Sanders and Brandes wanted to know whether community science could play a significant role in scientific research. They started with a model developed by the University of Florida microplastics project, Florida Microplastic Awareness Project.

“We took that model and adapted it to what we thought we needed here on the Georgia coast,” Sanders said. 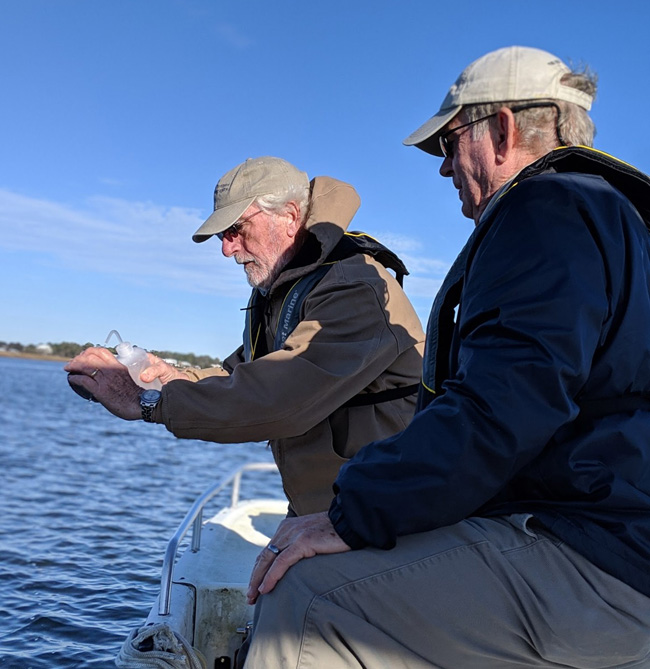 “It’s worked out great, because we have a group of volunteers that are very interested in learning more about this global issue,” Sanders said. “But more importantly, they’re interested in doing something about it. And so, this afforded an opportunity for volunteers to come in and not only help us do the science, but also become advocates for the project and advocates for what we were trying to accomplish.”

Roger Cayer is one community scientist volunteer. “I feel like studies like this are important to raise the awareness level of the general population about plastic pollution,” he said. “Who would have thought that synthetic clothing would become such a major problem?”
Brandes is very careful to avoid using the term “amateur” to describe the team of volunteers. “I think, sometimes, there can be a negative connotation to that word, but the people who have been working on this project have been wonderful and very dedicated.”

He said that everyone involved understands the critical importance of proper research technique, strict protocols and training in order to obtain believable data.

The COVID-19 pandemic put a halt to the field work for the past 12 months. As Brandes said, it is difficult to socially distance on a 24 foot Carolina skiff. 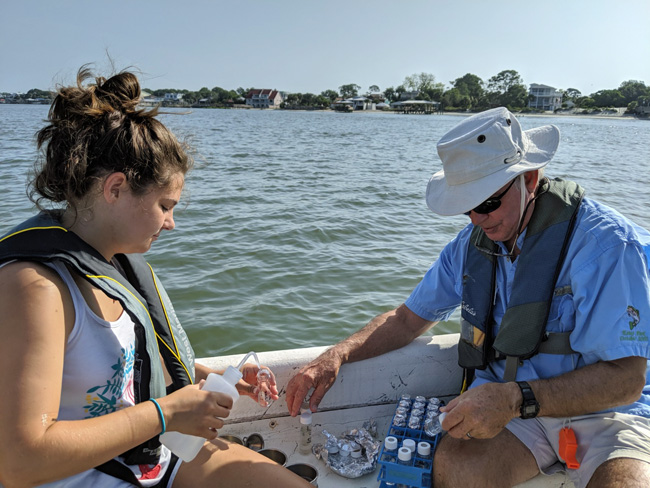 “Take community science, and its advantages, and its bonuses and how people can be an integral, an important part of scientific research, because they are force multipliers,” Sanders said. “They allow us to do so much more on such a larger scale than we would be able to do on a day-to-day basis.”

Sanders said the community scientists opened her eyes to how the public is interested in environmental issues, especially issues that are in their own backyard. And they want to be advocates.

“So that’s been a rewarding aspect of this project, to not only get to know the volunteers or the community scientists on a personal level, but to realize their passion for the work is just as great as our passion,” she said.

That passion is echoed by Cayer who said he has enjoyed “the camaraderie, the laughs, the sharing of knowledge and ideas. And getting to know each member on a deeper level by sharing a common passion and goals.”

The entire paper can be found HERE.