After a pandemic-induced delay of nearly two years, scientists at the University of Georgia Skidaway Institute of Oceanography have started their 4-year research project to study how dust in the atmosphere is deposited in the ocean and how that affects chemical and biological processes there. The research team of Clifton Buck, Daniel Ohnemus and Christopher Marsay had originally planned to begin collecting aerosol samples in Hawaii in early 2021, but COVID-19 changed all that.

“One of the primary obstacles was the fact that the state of Hawaii was closed down for much of the pandemic, and they weren’t allowing outside visitors without 14-day quarantines,” Buck said. “So, that curtailed any visits for us for obvious reasons, not the least of which was how expensive it would be to sit in a hotel for two weeks doing nothing.”

In December 2021, Buck and Ohnemus got the project moving again with a trip to Hawaii to meet with their research partners at the University of Hawaii and to inspect the Makai Research Pier on the southeast or windward side of Oahu. In mid-January University of Hawaii scientists installed a set of aerosol filters and began collecting dust samples from the atmosphere.

“We’re excited to keep moving forward, and we expect to start receiving samples for chemical analysis later in the spring,” Buck said. 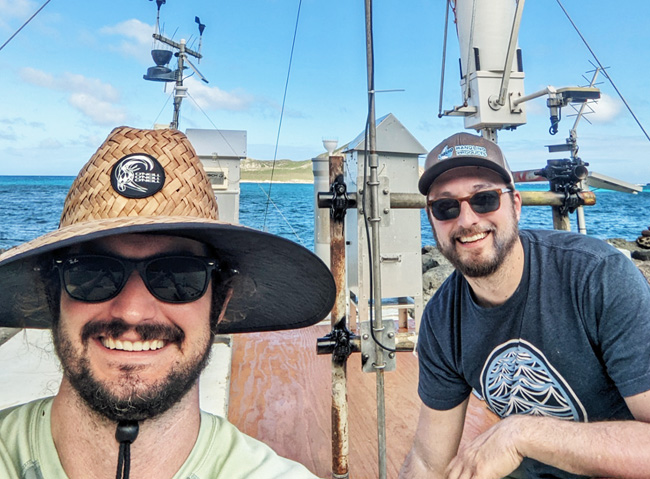 Clifton Buck (l) and Daniel Ohnemus (r) pose in front of their collection equipment on the Makai Research Pier.

The overall goal is to look at the rate that dust is deposited into the ocean and what happens to it once it is in the water column. The chemistry of the ocean can be changed by the introduction and removal of elements, including trace elements present in low concentrations. In some cases, these elements are vital to biological processes and ocean food webs. A good example is iron, which varies in concentration from one part of the ocean to another. Iron is important to the growth of phytoplankton, which make up the base of the marine food web and produce about half the oxygen in the atmosphere.

“The North Pacific is characterized by a very strong seasonal cycle in the amount of dust that that’s transported us, particularly from Asia,” Ohnemus said. “So, we can see there’s dusty periods and low dust periods. We’ll be able to track some of that change as well and look at differences in the chemical composition of dust based on the on the time of year.”

The team will utilize aerosol filters, which are essentially large vacuum cleaners, to collect dust samples from the air. They will also install specialized rain collectors to measure chemicals that are contained in rain drops. 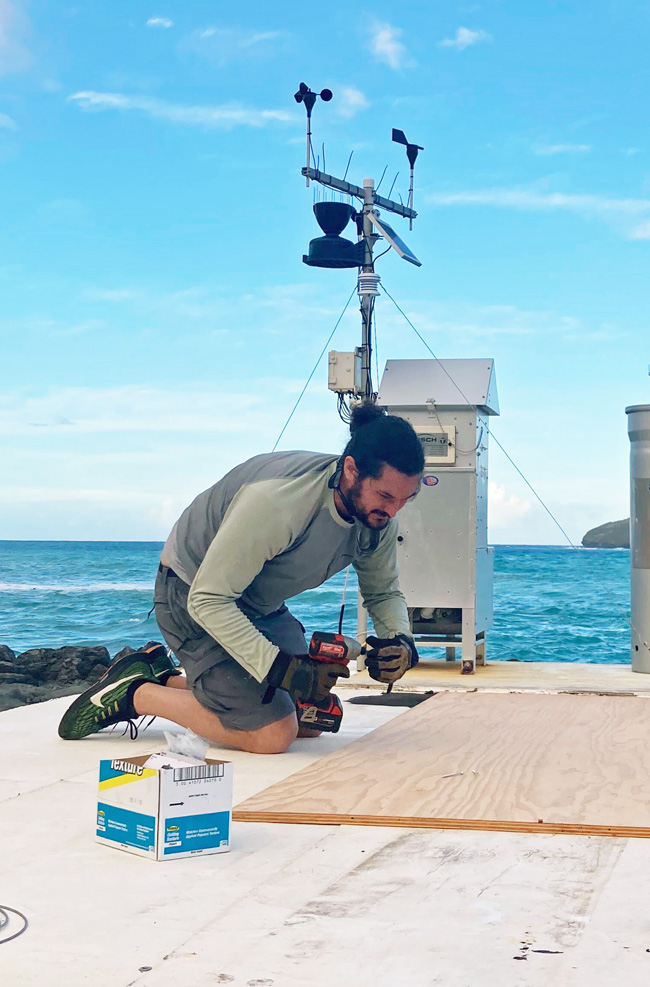 Clifton Buck works at the Makai Research Pier with an aerosol filter and weather station in the background.

The researchers will also undertake a series of six research cruises to collect water samples at the Hawaii Ocean Time-Series Station Aloha. This is a six-mile wide section of ocean approximately 200 kilometers from Oahu where oceanographers from around the world study ocean conditions over long time spans. A key goal of this project will be to obtain relatively frequent measurements over two full annual cycles. By taking weekly aerosol samples, and water samples every few months, the researchers hope to obtain a picture of how the atmosphere and the ocean change on a weekly, monthly or seasonal basis.

“We can create these long time series of data,” Buck said. “We’ll only do that for two years, but, nonetheless, it’ll provide kind of an unprecedented view of aerosol chemistry patterns in that in that part of the world.”

The researchers chose Hawaii as the site for their field work because the islands offer direct access to the remote, nutrient-limited open ocean. Hawaii also has strong seasonal fluctuations to its aerosol inputs, meaning there should be measurable changes over the two-year time series. The Hawaii Ocean Time Series has conducted regular research cruises to Station Aloha since the mid-1980s, so there is already a historic collection of relevant data. From a practical standpoint, it also means the scientists will have regular access to those cruises to collect their ocean samples.

“Hawaii is located in the center of this huge gyre in the North Pacific, and so samples taken there are representative of a huge chunk of the planet,” Ohnemus said. “It’s one of the largest biomes on the planet.

“Aerosols and water particles that make it out to that part of Hawaii are pretty similar in each direction, so it’s sort of a great spot to access data and samples from representative of the North Pacific in general.”