The Georgia General Assembly appropriated $2 million as matching funds to refit of UGA Skidaway Institute of Oceanography’s Research Vessel Savannah. The appropriation was included in the amended Fiscal Year 2022 state budget signed by Governor Brian Kemp. The $2 million appropriation is only a portion of the cost of the $4.6 million project. The remaining funds will be contributed by the university, UGA Skidaway Institute and the National Science Foundation. 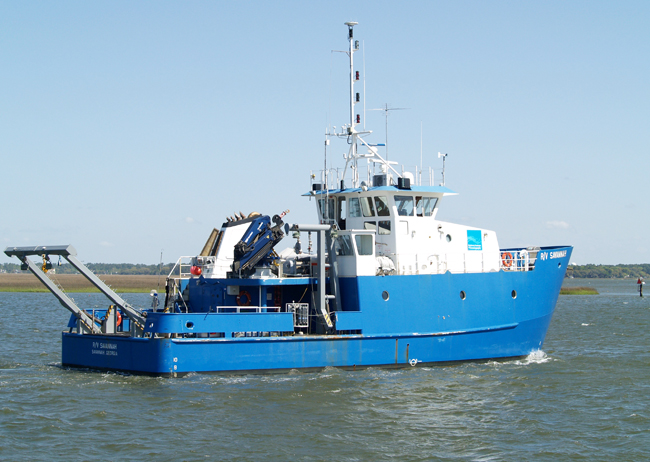 The RV Savannah was purchased with state funds in 2001 for $3.2 million. It is used by UGA Skidaway Institute scientists as well as scientists from throughout the world who need access to the coastal ocean from Delaware Bay to the western Gulf of Mexico. Users are charged a day rate that covers the costs for operations and maintenance of the vessel, which annually spends about 150 days at sea on cutting-edge research and experiential education missions.

“Our vessel is really a flagship for the state of Georgia. And in a lot of ways, it gives Georgia, the University System, UGA and the state a much higher national and international profile, hosting one of only 18 vessels in the US academic research fleet,” UGA Skidaway Institute Director Clark Alexander said. “Also, it appropriately gives us a much higher profile in the oceanographic community.”

Since being put into service, the RV Savannah has generated more than $25 million in direct economic benefit to the state of Georgia through sponsored expenses.

Students frequently participate in research cruises, and the vessel is a unique “floating classroom” for UGA and University System of Georgia undergraduate and graduate students.

Steel-hulled vessels often require a mid-life refit at about 20 years of age to counteract the corrosive effects of coastal marine waters. Engines, generators, and major safety systems are overhauled, and science capabilities are enhanced to make the ship a more capable science platform.

Science enhancements include lengthening the vessel to provide more deck space. This allows the RV Savannah to carry self-contained research labs, which are routinely built inside 20-foot shipping containers. This will make the ship more attractive to scientists who want to bring their own specialized laboratory with them on a cruise.

“We are very thankful to the university for its strong support, and to Governor Kemp and the General Assembly for approving this appropriation,” Alexander said. “We are especially grateful to the Chatham County legislative delegation for their support of our request.”