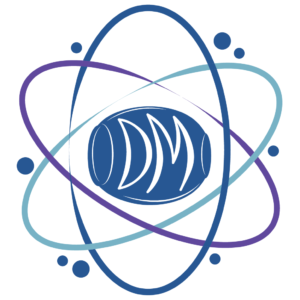 Continental shelf ecosystems are known to have periodic blooms of gelatinous zooplankton (also known as “jellies”), yet the effects of these blooms on the broader marine food web are poorly understood. Doliolids are one such group of gelatinous zooplankton that form blooms just off the coast of Georgia (South Atlantic Bight) and other shelf ecosystems. These barrel-shaped jellies are actually distant cousins of all animals with a backbone in the phylum Chordata, but they are only millimeters to centimeters long and feed on phytoplankton and other particles in the water column. Despite their diminutive size, their power resides in their amazing reproductive ability, which allows them to completely overwhelm a patch of water when conditions are just right.

Examples of the different life stages (from left to right): phorozooid or gonozooid, phorozooid (with budding gonozooids), and nurse. On the nurse, the “tail” is full of trophozooids that feed to nourish the entire colony. This tail, known as a cadophore, also produces phorozooids (~60 per day!). These asexual reproductive life phases can lead to rapid, overwhelming blooms.

One of the fundamental questions in biological oceanography is: what happens to the primary production in the ocean? What we often refer to as the “fate” of fixed carbon by phytoplankton can generate the environmental conditions that influence what kinds of animals are favored or disfavored. Under some circumstances, phytoplankton are directly consumed by crustaceans (e.g., copepods), which are in turn fed upon by higher trophic level organisms like small fishes. This “classical food web” is what fuels many of the most productive fisheries all over the world. However, the pathways for primary production are more complicated, as phytoplankton can also be consumed or partially digested by numerous gelatinous organisms that use mucus to feed, such as the tunicates, which include doliolids, salps, and appendicularians. Because of their fragility, many of these mucus-feeding gelatinous organisms are poorly understood: we do not know how many there are, where they reside in the water column, or how they alter the environment for other organisms.

For the NSF-funded Dol-MICROBE project (Grant #2023133), we are going to understand how the presence or absence of doliolids influences microbial processes and the South Atlantic Bight food web (abundances and diets of different plankton). We hypothesize that doliolid dominance enhances microbial loop processes and results in a decrease in the efficiency of transfer of primary production to consumers. We will test this hypothesis by combining stable isotope analysis (to resolve food web relationships), microbial respiration measurements (to measure microbial activity), microbial metagenomics and transcriptomics (to identify what genes and proteins are being used by the microbes), and in situ imaging (to identify where in the water column different organisms aggregate). This combination of approaches should give us a clearer picture as to what the doliolids are doing to their surrounding environment when they form large blooms. 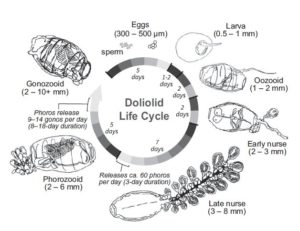 Below you will find links to updates from our field expeditions, extra background information about doliolids and the South Atlantic Bight, a list of relevant publications (both from this project and older ones that influenced our understanding), and resources for teachers for those of you who want to learn more about these fascinating animals.

Doliolids are members of an understudied “fragile food web,” which also includes siphonophores (fast-swimming, entering from the top left side of the image) and colonial organisms (a spherical radiolarian which can be seen crossing paths with the doliolid), among others. Most of the smaller, dark crustaceans are copepods. In the bottom right corner, you can see an arrow worm (chaetognath).