There are more than a trillion microplastic particles and fibers in Georgia’s coastal waters. That is a preliminary estimate by a team of University of Georgia Skidaway Institute of Oceanography researchers. Funded by Georgia Sea Grant and led by UGA Skidaway Institute scientist Jay Brandes, the team is in the middle of a two-year study to ascertain the extent of microplastics pollution in Georgia’s coastal waters.

Microplastics are tiny pieces of plastic—smaller than five millimeters, or about a fifth of an inch—that have either been manufactured small or have broken down from larger pieces. They can be found in our beaches, water and in the digestive systems of aquatic wildlife. Early in the study, researchers made a discovery they had not anticipated – microfibers, extremely fine synthetic fibers used to create textiles, dominated the types of microplastics found in Georgia’s estuaries. Previous scientific studies around the world have found that they enter the environment when an article of clothing is laundered, and the microfibers are washed down the drain with the rinse water. According to Brandes, microfibers are pervasive—so much so that when the researchers take samples to the laboratory they have to take special measures to prevent contamination of their samples from microfibers floating in the air. 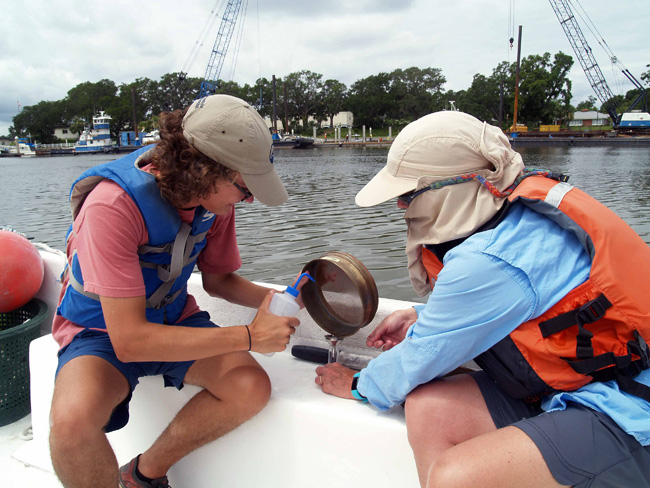 The microplastics estimate in Georgia’s coastal waters comes from work conducted by UGA College of Engineering student Jacob Mabrey, who worked on the project this summer. Mabrey gathered water samples from 40 different sites along the length of the Georgia coast — from Savannah to St. Marys. The sites ranged from relatively remote areas to more populated sections such as Savannah and Brunswick. Many of the sites he sampled were public boat ramps and docks, but Mabrey was also able to access some collection sites in the Savannah area by boat. He processed the water samples by running them through fine filters and analyzing what he found.

“It’s interesting he found microplastics in almost every sample he collected,” Brandes said. “We have microplastics all up and down the coast.”

Not surprisingly, microplastic particles and fibers were more prevalent near population centers. They were highest in the samples collected in Savannah. The concentrations in samples collected in Brunswick and St. Marys were less so, but still markedly greater than collected at remote sites.”

“The numbers seem to correlate with population, which makes sense,” Brandes said. “We are getting these microplastics locally. They are not coming from offshore or moving up the coast.” 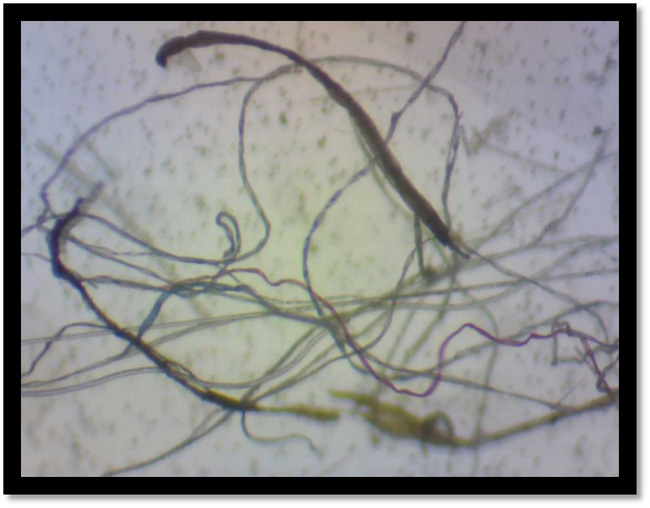 A microscopic view of a microfiber.

It is not clear what, if any, effect these microplastics are having on the coastal ecosystem. Another team member, UGA Marine Extension and Georgia Sea Grant educator Dodie Sanders, searches for microplastics in the gut contents of marine animals caught in trawls. She frequently finds microplastics, but not in great accumulations. Brandes says that while microplastics permeate the entire estuarine ecosystem, they don’t appear to be having a strong negative impact.

“On the other hand, we don’t know if microplastics are having a subtler effect,” he said.

Some scientists have speculated that microplastics can act as a sponge for contaminants, collecting chemicals, pollutants and pesticides and concentrating them. When an organism eats one, it would act like a poison pill.

“There is some evidence that can happen,” Brandes said. “But there is no evidence that is a significant issue on the Georgia coast.”

Brandes says he still finds the issue interesting as a measure of human impact on the environment. Most of the particles found are either microfibers or pieces of plastic that have broken down from larger objects, like water bottles or plastic bags. What, if anything, to do about it is another question.

“As a society, are we OK with a certain amount of contamination in our environment,” he asked. “Do we decide that we should make a concentrated effort to get rid of the things, or is the issue not causing enough of a problem that we can ignore it instead?”