The Arctic is experiencing the effects of climate change faster than anywhere on the planet, yet it is one of the least understood regions, due largely to the difficulty of making observations and collecting samples there. With the support of National Science Foundation funding, two University of Georgia Skidaway Institute of Oceanography scientists are studying the biogeochemical processes in the Arctic and recently had their research published in two peer-reviewed science journals.

Post-doctoral researcher Christopher Marsay and assistant professor Clifton Buck have been participants in the international GEOTRACES program which aims to improve the understanding of biogeochemical cycles in the ocean, focusing on important trace elements. Trace elements are present in the ocean in very low concentrations, however some of those elements are essential for marine life and can influence the functioning of ocean ecosystems while others are potentially toxic to plants and animals.

“The Arctic part of the GEOTRACES program is particularly important because the region is already showing significant changes as a result of climate change and is relatively poorly studied with respects to many trace elements,” Marsay said. 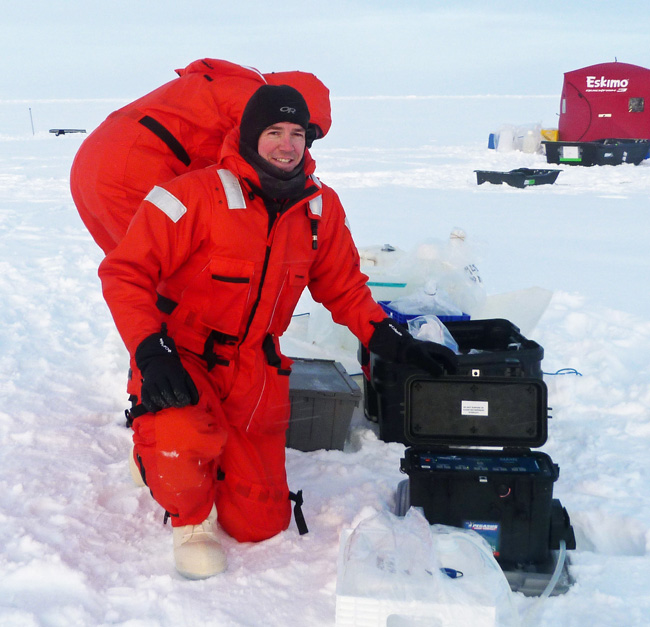 Chris Marsay collects samples on the Arctic icecap during the fall 2015 research cruise.

Marsay is the lead author on both papers, which are the result of analysis of samples he collected on a 64-day GEOTRACES cruise from Dutch Harbor, Alaska to the North Pole and back from August through October 2015.

“Our research goals are to describe the chemistry of atmospheric deposition to the region,” Buck said. “These data will then be shared with the scientific community to help better understand biogeochemical cycling of trace elements in the Arctic Ocean.”

The first paper, published in the journal Chemical Geology, describes the concentrations of 11 trace elements in atmospheric samples that Marsay collected during the cruise by pumping large volumes of air through filters. The sources of this material could include natural material from land surfaces, smoke and soot from burning vegetation, and emissions from industrial activity.

“We compare the results to other ocean regions and speculate as to the sources of the material reaching the Arctic,” Marsay said. “An important part of the work is that we used the concentration data to estimate how much of these chemicals settle from the atmosphere to the surface of the ocean.”

The second paper was published in the journal Marine Chemistry. In it, Marsay and his co-authors examine trace elements in Arctic melt ponds. Melt ponds are a widespread feature of the sea ice in the Arctic during the summer months. As snow melts it forms ponds on top of the ice which eventually drain into the surface ocean.

“Melt ponds are an important intermediate step in atmospheric deposition to the surface ocean that is unique to the polar regions and not very well studied,” Marsay said. “Ongoing climate change in the Arctic will change this pathway, and we want to know how that may affect distribution and biological availability of trace elements in the surface ocean.”

The paper brought together measurements of several trace elements made by different research groups involved in the GEOTRACES project. It showed that the chemistry in melt ponds is also influenced by material in sea ice and the seawater beneath the ice, which modifies the chemistry of material deposited from the atmosphere before it reaches the surface ocean.

The two papers can be accessed through the UGA Skidaway Institute website at: https://www.skio.uga.edu/research/research-publications/.