Scientists from the University of Georgia Skidaway Institute of Oceanography and the National Oceanic and Atmospheric Administration are working together to operate a team of uncrewed marine vehicles to improve hurricane forecasts. Autonomous underwater vehicles, or “gliders,” operated by UGA Skidaway Institute, are working in conjunction with NOAA-operated Saildrone Explorers travelling on the ocean surface. Working together, the two types of drones are able to monitor ocean conditions around and within storms, from the atmosphere down to the sea floor. They will provide hurricane forecasters with a rich data set to use to improve hurricane forecasts. 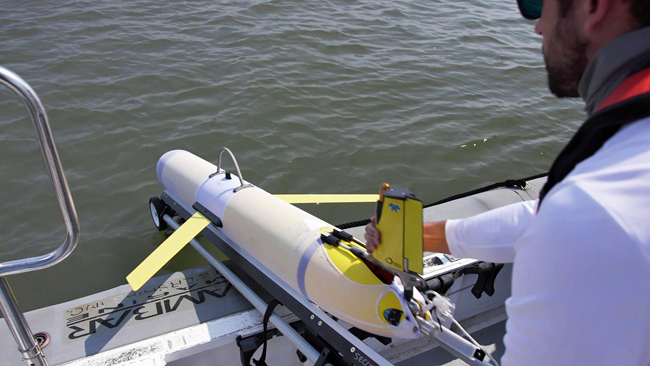 A “glider” about to be launched.

“This experiment is an exciting and challenging opportunity to coordinate robotic platforms working on the ocean’s surface with a complementary underwater robot,” said UGA Skidaway Institute researcher Catherine Edwards, “By sending the pair of vehicles into a hurricane and working together, we have the potential to collect an unprecedented view of what happens underneath tropical storms.”

The models hurricane forecasters use to predict the paths of storms have become much more accurate in recent years, but their ability to accurately predict a storm’s intensity has improved more slowly. Hurricanes feed off of heat from warm ocean water, like that found in the Caribbean, in the Gulf Stream and in the shallow waters off the southeastern United States, known as the South Atlantic Bight. This can be a tremendous source of energy for developing storms. Heat is transferred between the ocean and atmosphere at the ocean’s surface, but it is important to understand the amount of subsurface heat as well.

This is where autonomous underwater vehicles, also known as gliders, can collect valuable information. Gliders are torpedo-shaped crafts that can be packed with sensors and sent on underwater missions to collect oceanographic data. The gliders measure temperature and salinity, among other parameters, as they profile up and down in the water. Equipped with satellite phones, the gliders surface periodically to transmit their recorded data during missions that can last from weeks to months. The data from the gliders is contributed to national and international repositories of ocean and atmospheric data that are used to improve ocean and atmospheric models used in hurricane forecasting. 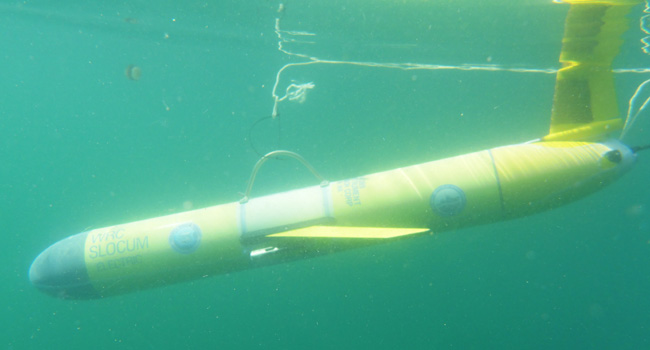 A “glider” shortly after launch and still tethered to the launch boat.

“Not only can we watch what happens in the ocean as the storm nears, but what that glider sees is incorporated into the ocean models that underpin tropical storm forecasts from NOAA’s models within hours of the measurement itself,” Edwards said. “The improved forecasts help us position our gliders even better, so it’s a positive feedback for ocean observing.”

Meanwhile, complementing the underwater glider, NOAA-operated Saildrone Explorers will cruise the surface, measuring surface and atmospheric conditions. saildrones are uncrewed surface vehicles powered by wind and solar energy, and remotely piloted via satellite telecommunication. They measure solar irradiance, barometric pressure, air temperature, humidity, wind, waves, water temperature, salinity, chlorophyll, dissolved oxygen and ocean currents. This information, in combination with measurements of surface short- and long-wave radiation, can be used to understand when, where and how heat and energy are exchanged between the ocean and atmosphere. The five Saildrone Explorers deployed in this hurricane season are equipped with specially designed hurricane wings. The shorter, more rugged wing is designed to withstand hurricane strength winds and waves. 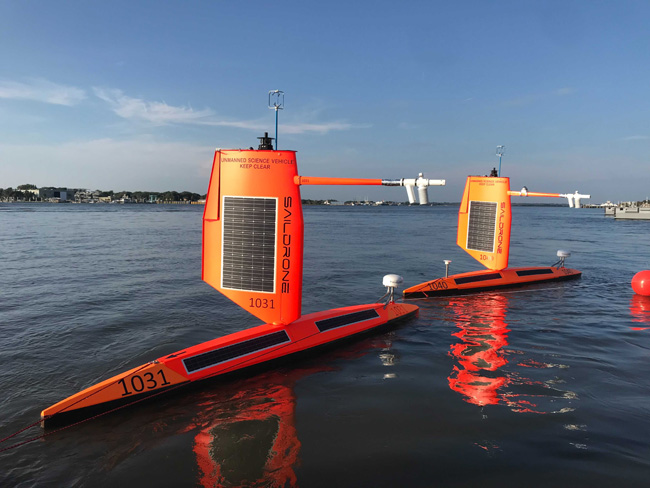 Two saildrones at their launching in Jacksonville.

“The main objectives of the saildrone mission are to advance understanding of how hurricanes exchange energy with the ocean and to improve forecasts of hurricane intensification by sending the data directly to operational weather prediction centers for incorporation into their forecast models,” said NOAA’s Greg Foltz, oceanographer and lead scientist for the saildrone project. “Having collocated measurements with underwater gliders will bring a new level of understanding and greater potential for improved prediction, since we will have valuable information on how storms interact with the subsurface ocean.”

UGA Skidaway Institute gliders and NOAA’s Saildrone Explorers will operate in two sectors off the coast of Florida, Georgia and South Carolina. Meanwhile, NOAA has also deployed three more saildrones, two of which will work with other gliders in and around the Caribbean Sea. The deployments ae expected to continue through the end of October.

“The combination of these two data sets will help the forecast models better represent the connections between the ocean and the atmosphere, both as the storm approaches and after hurricane season as scientists dig deeper into the processes the combined data sets can reveal,” Edwards said.