Marc Frischer continues his account of his and Victoria Baylor’s research trip to Barrow, Alaska.

Today we again woke up early and began setting up our labs. Actually day and night are surprisingly similar around here.

Victoria spent most of the day setting up our molecular lab in the BARC building. It is in this lab that we will extract RNA, DNA, and preserve other samples from the bacteria we collect from the Arctic Ocean. One of the questions we are addressing in this project is whether Arctic bacteria are competing with Arctic phytoplankton for nutrients (specifically nitrogen) and whether when more organic carbon from melting permafrost reaches the Arctic coastal ocean if this competition is intensified. We suspect that an intensified competition between bacteria and phytoplankton (algae) for nitrogen will lead to a less productive Arctic food web in a future warmer Arctic ocean. One way to address this question is to measure how actively bacteria are using the most prevalent form of nitrogen in these waters, nitrate (NO3). By looking for this gene and measuring how active it is, we are learning about how this critical nutrient cycling function is controlled. 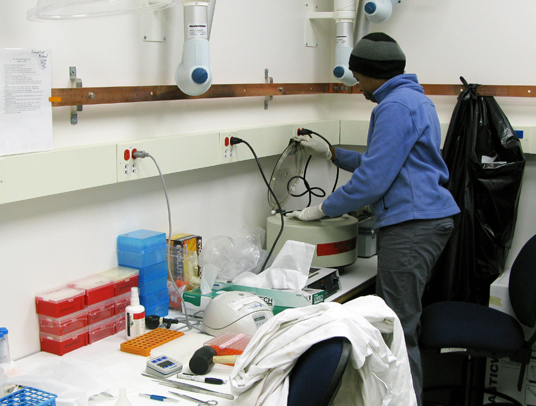 Victoria setting up lab in BARC.

While  Victoria was setting up the lab I was setting-up the lab (walk in freezer) where we will be filtering water and conducting a bioassay experiment (more on that later). I also spent some time making sure our sampling gear was organized and functional. The pump we use to collect the water from under the ice had seized but luckily with the help of Lance Bennett (part of the CPS team) we got it running. We also brought with us a relatively new instrument to measure water conditions that I am not too familiar with. Initially I couldn’t manage to get the instrument to communicate with its hand held computer, but after a long struggle I finally got it to work. Hopefully I’ll be able to remember everything when we are actually out on the ice.  It’s a cool instrument though, it measures water depth, temperature, salinity, pH, turbidity and the concentrations of chlorophyll and dissolved oxygen all in real time.

While we were setting-up, our logistics team accompanied by Steven Baer (VIMS) as a representative of the science team was scouting our sampling sites. For those of you who may not be familiar with our sampling plans, when the ocean is frozen the way we sample is to set-up a camp on the ice, drill holes, and collect water through them. To safely do this we need to be on well secured and thick ice. This time of year the ice is pretty dynamic as it is still forming and major storms can move it around quite a lot. In advance of our trip this year we had identified several possible sampling locations that were consistent with our science needs, but they need to be checked every day. So this morning the UMIAQ team checked. Unfortunately its seems as our original site developed a major crack in the ice and is moving so we had to switch to a different site a few miles northward where the ice appears to be thicker and is more securely grounded (frozen to land). However, even there the ice seems to be moving a lot. So the camp didn’t get set-up and the plan is to revaluate tomorrow morning. That means we wait, but it’s much better to be safe than to risk everything. If there is one thing I have learned during this project it is to be patient and to trust the support we are getting from our local logistic support team.

We’ll just have to see what tomorrow brings. The weather is predicted to be pretty mild. 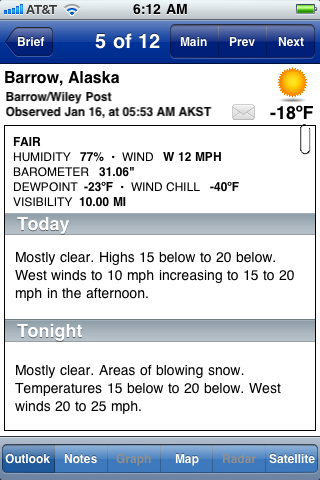