Ice conditions are still unstable.  Our UMIAQ support team spent the morning doing reconnaissance of our intended sampling sites. After yesterday’s efforts they suggested that since it might be dangerous, it wasn’t a good idea for anyone on the science team to accompany them. Because the ice is still forming and the ocean is a powerful force, the ice can break-up pretty quickly. The team first scouted out our near shore site, but it was inaccessible due to a major crack between it and our ice trail. We use a trail cut through the ice to guide us on a safe snow machine run over it. They continued on to our second site located further out into the ocean and to the north. The ice in that area seems to be more stable. They liked what they saw and decided that it would be safe for us to set up camp there. 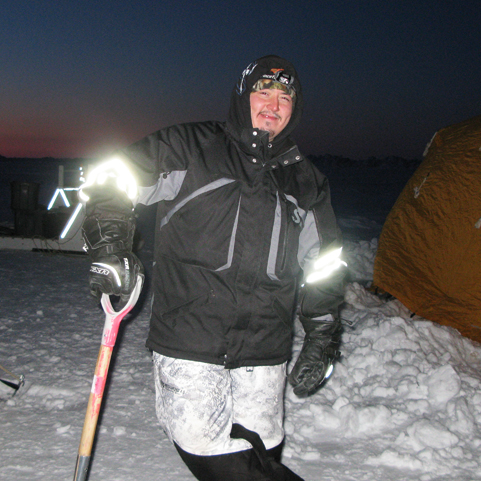 After making this decision the team came back, loaded up the camp gear (tents, generators, heaters, ice augers, etc) and went back out. This time Steven Baer from the Bronk group went with them to help orient the tents and make some basic measurements. Before starting we need to know the ice thickness, water depth, and usually how far light penetrates. In this case there basically isn’t any light but hey, we’re scientists. Measuring zero’s (or close to zero) can be just as important. Its data!

Meanwhile, back on the NARL campus where our labs are, there was a flurry of activity as we all checked and prepped our gear. Finally, around 3pm the camp was set-up and we were ready to go. I was pretty worried about how late it was getting, but because we have such a short time up here and the ice was deemed safe now we needed to push a little bit. Who knows if we’ll even get another chance given the dynamic condition of the ice.

The ride out was relatively uneventful. The ice was remarkably smooth compared to our previous trips.  As was explained to me, when the ice first forms it is relatively flat and it only gets jumbled up later as storms, wind, currents, and tides push it around. Flat ice generally means that it is new ice.  That is what was worrying everybody. We know the ice is still forming and moving a lot. Hopefully it won’t move while we’re on it! After about 30 min of driving we made it to our camp. Having well established sampling routines by now, this is our 6th expedition, we all got to work unloading our gear and starting to sample. The Yager group occupies their own tent (the smaller one) while the Frischer and Bronk group occupy the larger one. 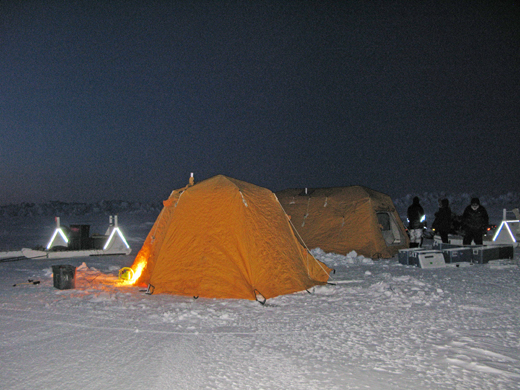 In the Frischer tent I got started right away making measurements of the water column. We are using a new instrument that lets us measure depth, temperature, salinity, oxygen, chlorophyll, pH, and turbidity. It’s a pretty nice instrument but a bit delicate and the computer software is not straightforward. We transported it as if it was a delicate infant wrapped in blankets with warm water bottles and hand warmers to make sure it didn’t freeze on the way out. I think we overdid it! When I unwrapped it in the tent it was positively hot. The instrument worked well and we got a good look at the water conditions. As expected the water temperatures was -1.8 deg C, salinity was around 33 PSU (normal for the Arctic coastal ocean), there was almost no chlorophyll in the water (no light no algae in the water). Most importantly the water column was well mixed which means that we could sample at one depth and be reasonably assured that it would be representative of the whole water column. We decided to sample at 2 meters below the bottom of the ice. 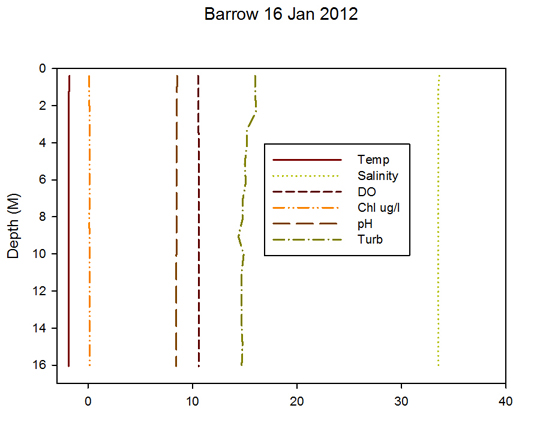 Graph of water data from the MANTA, Eureka Environmental

After I was finished measuring the water the Bronk group got rolling. They rinse and fill what seem like a million small bottles to which they add a very small amount of nutrients enriched in their stable isotope concentrations. Stable isotopes are non-radioactive form of elements (atoms) that are slightly heavier than the normal form. For example, the normal atomic weight of Carbon is 12 (meaning it has 12 protons) while the stable isotopic form has a weight of 13. We refer to it as 13C.  Because 13C  is slightly heavier than 12C, it can be measured on a mass spectrometer. By measuring how much of it goes into cells during an incubation, the rate of uptake can be calculated. The Bronk group is making some of the first ever measurements of nutrient uptake rates by microbes in this region of the Arctic coastal ocean.

The process went pretty smoothly but since it was so cold, even in the tent, the pipettes which they were using to inject the stable isotope into the samples were freezing and slowing the process. 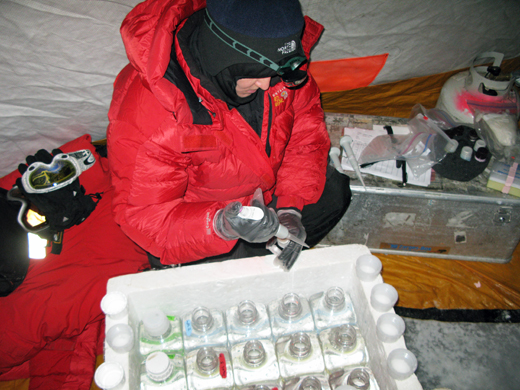 Meanwhile in the other tent the Yager group were having even more problems with freezing. They are collecting water samples to make measurements of the carbon chemistry and general activity of the microbes, so it is especially important that their samples do not freeze and are not exposed to the atmosphere which can contaminate the dissolved gas content of the seawater. Unfortunately, their samples were freezing.  However, after getting them off the ice floor of the tent and placing them into a seawater bath (a cooler filled with seawater) they seem to have solved the problem and were able to collect most of the samples they needed. 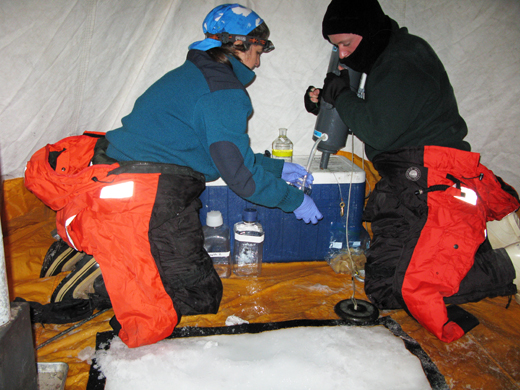 When the Bronk group was finished it was our turn.  Our sampling is probably the most straightforward, but we need to collect a lot of water.  We’re collecting enough water so that we can extract DNA and RNA from the bacteria in it.  We collect about 140 liters (about 40 gal or 310 lbs). Using a specially designed submersible pump we collected water in seven 20 liter carboys wrapped in neoprene and then place them in a cooler of snow. Believe it or not, the snow actually keeps the water from freezing. But, as simple as it sounds, we had our problems too. The generator that was running our pump ran out of gas.  Actually, the generator had a gas leak so it’s lucky it just ran out of gas and didn’t explode. But, because of excellent planning on the part of the UMIAQ team we had two generators on site. However, that meant the Yager group was without lights in their tent. We solved that problem by moving two snow machines so they pointed at the tent and the headlights provided enough light.

Finally we were all done and got all our gear and samples loaded back onto the sleds.  It was unbelievably cold and windy and we were all tired and ready to get back. The trip started off smoothly until I managed to get my sled stuck. It’s really tricky pulling a very heavily loaded sled. I had to slow down over a series of small ridges because the person in front of me slowed, and that was all it took for the snow machine to sink a little too much into some soft snow and lose traction. With all of us helping we disconnected the sled and managed to lift the back end of the snow machine out of snow, enough to get it moving. Then we were able to push the sled back to some more level ice and reconnect it to the snow machine. It was exhausting! But the fun wasn’t quite over. As we started moving again Debbie, in an effort to make it over the hole I had dug with the snow machine, went a little too fast over the area and bumped into Rachel and Jenna who were on the snow machine in front of them. No real harm though. Jenna fell off the snow machine but it was into soft snow and she wasn’t hurt. The brand new snow machine Deb was driving suffered a cosmetic crack in its fairing. Without further incident we all made it back safely to campus and quickly rushed our samples to our respective labs for processing.

Victoria and I spent the next 5 hours in our cold room filtering all that water we had collected. We had hoped to start another humic addition bioassay that is a component of Zac Tait’s thesis research, but it was just too late so we decided we’d do that first thing in the morning. After all the filtering was done, our samples put away safely, and all our gear cleaned-up it was time for some well deserved rest. I felt weary and frozen to the bone but pleased with the progress we had made.

Even though the sun won’t shine, tomorrow is a new day.