Skidaway Island, Ga. – University of Georgia researchers are hoping to find a consistent way to record the marine debris—particularly pieces of plastic—crowding Georgia’s beaches as part of an effort to find a solution for the growing problem.

Marine debris has been washing up on Georgia beaches and uninhabited islands for years. Combatting the issue starts with figuring out how big it is, and a new two-part study from the UGA Skidaway Institute of Oceanography and Marine Extension published online in the Marine Pollution Bulletin finds that marine debris reporting can improve if it becomes standardized.

The problem right now is this: A volunteer group goes out and records the weight or volume of the marine debris collected. However, volunteers don’t often record the specific square feet measured or the contents of the debris. Due to a lack of report standardization, researchers often can’t compare the marine debris, especially plastic fragments, reported by different groups. 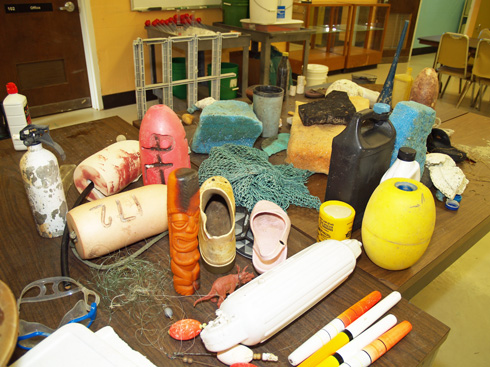 A sample of marine debris collected along the Georgia coast sits on a table at the UGA Skidaway Institute of Oceanography.

“Plastic debris is created on land and then it goes into rivers, flows into the ocean and washes up on land,” he said. “We’ve found that plastic debris ends up not only on populated beaches, but on inaccessible islands as well. We’ve found plastic everywhere on the coast.”

The first part of the study gathered debris from 20 sites along Georgia’s coast, including Tybee, Cumberland and Ossabaw islands. The debris was reported from volunteer organizations like Clean Coast, which hold monthly beach and marsh cleanups in Georgia. 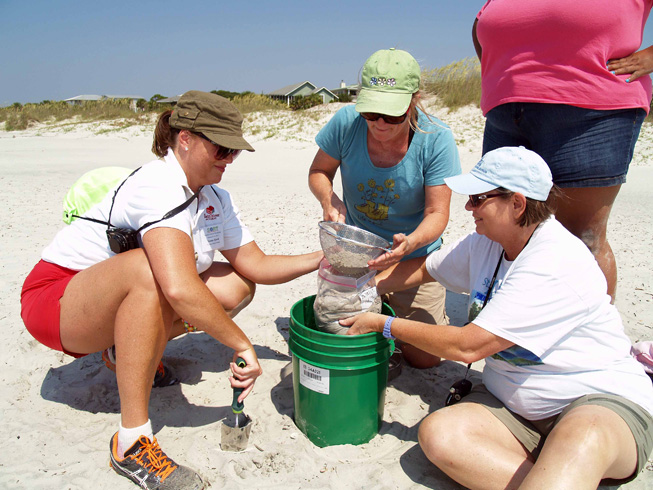 Participants in a July 2014 teacher’s workshop focusing on marine debris sift through the sands of Tybee Island in search of microplastic particles.

“The volunteer groups reported the weight of the debris, though we didn’t know the exact amount of plastic,” Lee said. “Based off the volunteer information we received, we did a follow-up study to more precisely measure the marine debris in a fixed location and period of time.”

The total collected debris ranged from 180 to 1,000 kilograms. The levels of plastic debris differed at each site over the course of the study, though plastic was consistently among the mix. Found plastic included plastic bottles, wrappers, food utensils and fragments of fishing gear.

Sanders spearheaded the second part of the study, where she and students collected plastic debris from Skidaway and Wassaw islands over a period of two years.

“While Dr. Lee did data analysis, I did some of the field work,” Sanders said. “We picked the two islands in the second part of the study because they were accessible sites where Marine Extension often takes students for marine education.”

For the fieldwork, Sanders and students visited the islands each month. They took inventory of what kinds of plastics were on specific areas of the coast.

“On about a monthly basis, I would take students to learn about debris and tally all the items on the islands,” Sanders said. “We took areas of 200 meters by 40 meters and recorded the items found. We also used GPS units to mark what areas we had done.”

The students, many of them in middle and high school, came from all over Georgia to assist. As part of Marine Extension, Sanders regularly teaches visiting students about marine life. When students volunteered to clean up, she tried to emphasize the issues surrounding debris.

“The bulk of the plastic comes from land,” Sanders said. “When people think of marine debris, they think of the ocean. I try to emphasize watershed concepts—what happens upstream ultimately gets downstream.”

“It can take years for plastic to degrade,” Lee said, adding, “80 percent of the plastic found at Wassaw turned out to be fragments. The fragments then spread and can have a number of environmental effects.”

Sanders says that since plastic debris is everywhere on the coast, it has to be addressed and reported efficiently to reduce its effects.

The full article on “The amount and accumulation rate of plastic debris on marshes and beaches on the Georgia coast” is available at www.sciencedirect.com/science/article/pii/S0025326X14008200#.