Images such as the Great Pacific Garbage Patch have attracted much attention to the problem of large-size marine debris, but another serious issue has garnered less visibility—marine microplastics. University of Georgia Skidaway Institute of Oceanography scientists Jay Brandes and Thais Bittar and UGA Marine Extension educator Dodie Sanders are hoping to change that and have received funding from Georgia Sea Grant to examine the extent of the microplastics problem along the Georgia coast. 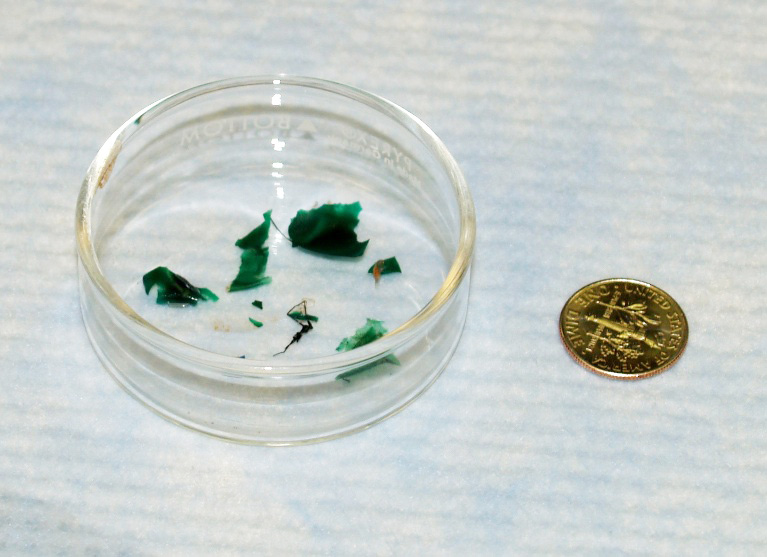 Samples of microplastic particles collected off the Georgia coast

Microplastics are particles smaller than five millimeters in size (about one fifth of an inch). They have many sources, from manufactured particles like microbeads used in cosmetics and skin cleaning creams to plastic pieces formed from the breakdown of larger debris. Microplastics are often consumed by marine organisms and may cause them significant harm. Until now, there has been no study on the possible extent of microplastic pollution in Georgia estuarine waters and the organisms that live there.

The project has three primary goals: The researchers will quantify the amount of plastics found in the gut contents of shellfish, fish and shrimp; determine the types of plastic pollution ingested by Georgia estuarine organisms; and educate stakeholders, the public, educators and their students about the issue of microplastic pollution.

The research team will collect marine organisms through the trawls routinely conducted by UGA Marine Extension and will separate, identify and measure the microplastics they find in the fish. As a part of its regular K-12 educational programs, Marine Extension conducts nearly 60 trawls annually and collects fish, shrimp and other organisms to assess the composition and health of local food webs.

“With this information, we expect to get a pretty good idea of how serious the microplastics problem is here in Georgia,” Brandes said.

The team will integrate the entire process into the UGA Marine Extension’s ongoing education programs. They will involve regional educators and their students in both sampling and counting efforts as part of overall marine debris educational programs. 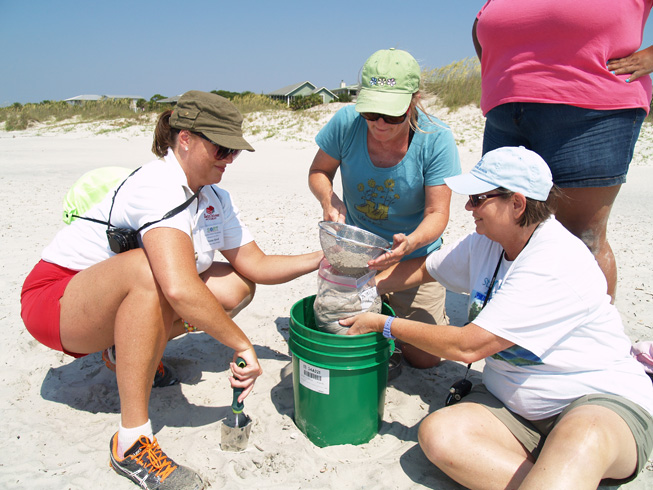 Teachers participating in a summer workshop sift through the sand of Tybee Island in search of microplastic particles.

The trawls will be conducted with the assistance of visiting school groups, composed of roughly 20 students each. During the trawls, the various species will be identified and counted by the students.  In addition, discussions of microplastic pollution and the potential of ingestion by marine life will be incorporated into the year-round education programs at Marine Extension, such as a fish dissection lab, the invertebrate lab and the plankton lab.

The researchers also plan to enhance an existing marine debris exhibit in the UGA Aquarium by adding a microplastic component.

The UGA Aquarium, UGA Marine Extension and Georgia Sea Grant are all part of the university’s Office of Public Service and Outreach.