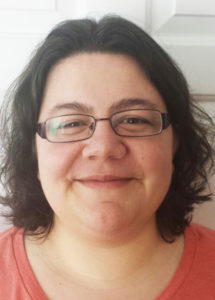 Harvey is one of UGA Skidaway Institute’s newest researchers, having joined the faculty in August of last year. Originally from Maine, she received her doctorate in oceanography from the University of Rhode Island and followed that with a position as a post-doctoral investigator at Woods Hole Oceanographic Institute. While she has a broad set of interests, phytoplankton have become the focus of her research.

Phytoplankton also play an important role in how nutrients and carbon are cycled around the world. It’s estimated that phytoplankton provide about 50 percent of the oxygen we breathe.

To study phytoplankton, she said, is to look into a world where lots of different interactions happen. Harvey’s work specifically focuses on the interactions between those single cell plants and the other organisms around them, including microzooplankton predators, bacteria and other phytoplankton. She hopes to better understand some of those individual interactions in order to make predictions on a larger scale.

“You wouldn’t think a single cell could be so dynamic, but phytoplankton are really complex,” Harvey said. “Rumor is NASA once took a look at one particular class of phytoplankton to see if they were extra-terrestrial.”

Using sensors on their cell surface, phytoplankton can sense their immediate surroundings — detecting organisms around them, sensing predators and modifying their behavior to escape predation. Some also produce toxic compounds in self-defense.

“Amazingly, they have very specific but very important interactions with other organisms,” she said. “You wouldn’t think a single cell could to that, but they do, and it can have some large-scale consequences.”

Last fall’s cruise on board the Woods Hole Research Vessel Atlantis was part of the NASA-sponsored North Atlantic Aerosols and Marine Ecosystems Study, or NAAMES. It was the first of a series of cruises to study an annual spring phytoplankton bloom in the North Atlantic. Harvey was one of 32 scientists on board. Her particular role was to measure phytoplankton mortality by both looking at the rate that phytoplankton were subject to predation or “grazing” by microzooplankton and also mortality due to viruses.

Cruising the North Atlantic in November was no picnic. Harvey recalled 30-foot seas and 50-knot winds.

“That was a little adventurous,” she said. “We couldn’t do deck work. I didn’t tell my parents or husband about that.”

However, at 274 feet long and displacing more than 3,500 tons, the R/V Atlantis is a fairly large research ship, and Harvey says she never felt unsafe.

The days frequently started at 4 a.m. when scientists would lower an instrument package over the side to measure ocean conditions like salinity and temperature and to collect water samples. The scientists would work until eight or nine in the evening before catching some sleep and starting again the next morning.

“It’s a lot of long, hard work, but, on the other hand, your life becomes very simple,” she said. “The commitments in your normal life fade away. Someone even cooks your food for you every day.

“You work for long hours, but in the scheme of things, that is what you are there to do. There are no other distractions.”

Harvey says she was very happy to be part of the science team on the first cruise of the NAAMES project, and she enjoyed working with the other scientists on board.

“Everyone was very collegial and thrilled to be a part of a really cool project,” she said. “Scientists always like to get data, so sometimes I think that if I can be collecting new data, I am happy.”