We woke up a little late this morning after yesterday’s late night. Victoria and I met to go over plans for the day and to discuss the details of the experiment that we plan to start today. The experiment is a component of SSU graduate student Zac Tait’s thesis project. Zac couldn’t come this time because he is about to be a father. His daughter, who they will name Iris, is due on 4 February. Zac left me and Victoria with extensive notes and prepared all the supplies but we’ll run it.

The goal of this experiment, as in previous ones, is to test the hypothesis that Arctic Ocean bacteria can utilize the carbon locked up in the humic material that makes up the permafrost, but doing so will require them to acquire more nitrogen. The most abundant source of nitrogen in the water is found in the mineral form of nitrate (NO3). One of the major questions of our project is whether the release of the carbon stored in the permafrost will set-up increased competition for NO3 between the photosynthesizing autotrophs (phytoplankton) and the CO2 respiring heterotrophs (bacteria). The idea is that the more organic carbon that gets released into the ocean the more bacteria activity will occur.  However, that increase in activity will be at the expense of nitrate resources that the phytoplankton need in the spring (when the lights come back on) to grow.  If there is less nitrate available there will be less phytoplankton and therefore less fish, seals, whales etc that depend on a food web whose base is the phyotoplankton. So it’s somewhat of a counterintuitive idea; add more nutrients and get less out.

In previous experiments we found generally that this hypothesis is true, but that the carbon-rich humic material we collected directly from the tundra is used very slowly which makes the question hard to address given the practical constraints of our time here. Because our time is short and the temperatures are cold which slows everything down, we decided on a new twist for these experiments. This time, we are using humic material that has already been broken down some by exposure to sunlight. This process is called photo degradation. Photo degrading complex carbon molecules occurs naturally (It’s reasonable to expect that humics derived from melting permafrost will be exposed to sunlight on their trip to the ocean.) and it increases its availability to bacteria as a nutrient source. So, prior to the trip Zac exposed humics in a solar simulator for 0, 5 and 15 days resulting in increasingly degraded humic materials.  Amazingly, after 15 days of simulated exposure to sunlight the brown humic material was almost completely colorless. The carbon is still there but since it has been broken into smaller and less condensed molecules it doesn’t absorb as much light, thus it appears lighter in color.

Our experimental design is relatively simple. We use 4 liter (1 gal) milk jugs (actually they are a special nontoxic plastic but they look like milk jugs) to incubate bacteria with the humics and allow them to grow.  Over the course of the week we’ll be here we take samples to watch the bacteria grow track the dynamics of the carbon and nitrogen. Our hypothesis will be supported if we see the bacteria grow and the carbon disappear in coordination with the disappearance of the NO3.

After 9 hours of filtering and rinsing we finally got the experiment set-up and running. We’ll sample it daily (or every other day) for the time we’re up here. 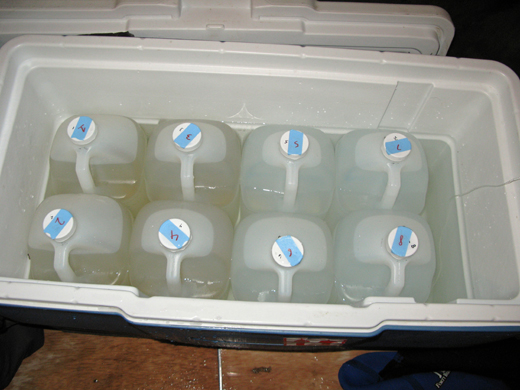 But the real excitement happened on the ice today. Because we are so concerned about the stability of the ice the UMIAQ crew went out to check our ice camp which we had left standing. When they got out there they realized that the ice was moving a lot and that large cracks were beginning to appear. The crew was scared enough that they just came back leaving the tent behind. But Brower thought they could get it and made a heroic trip back out with Tony and Glenn. They ripped the tents out of the ice leaving the stakes behind, quickly lashed it on two sleds, and hightailed it back jumping cracks with open water. We heard some of it on the radio. The whole situation has us pretty nervous and thinking very carefully about safety. 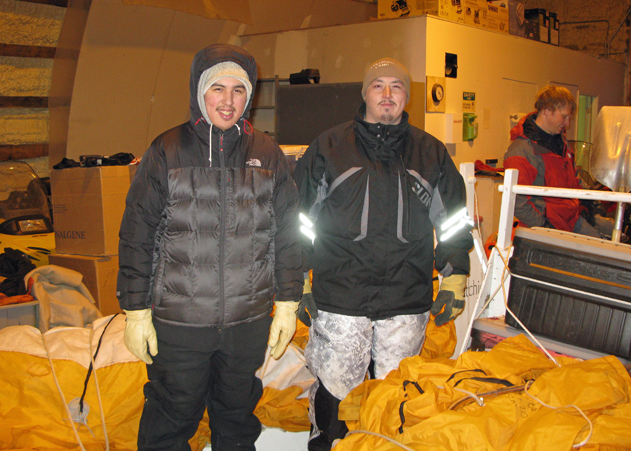 Brower and Glenn standing by the rescued tents.

Either way tomorrow we won’t go out.  We’ll re-group and re-evaluate.